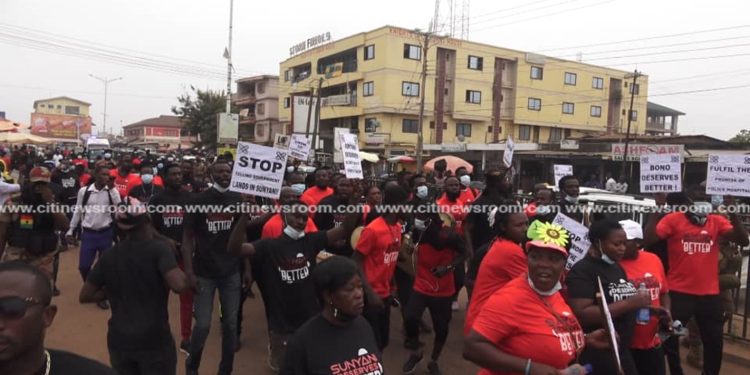 The Municipal Chief Executive for Sunyani, Ansu Kumi, has given assurances of the government’s commitment to construct roads in the municipality.

His assurances come after members of the Sunyani Development Youth Association on Friday hit the streets of Sunyani in a demonstration to draw attention to the deplorable state of facilities in the area.

The MCE in a Citi News interview discounted the claims of the youth that Sunyani is not seeing any development.

“The statement that nothing is happening in Sunyani is something I want to debunk. A few months ago, some of the roads were so bad, but now those roads are under construction. The drains have been done and filed, waiting to be tarred. When you come to Sunyani, Victoria Park, which for so many years has not seen any tarring, has now been tarred,” he said.

The convenor of the demonstration in Sunyani, Mr. Ransford Antwi, in an earlier Citi News interview said “I love my city. I was born and bred in Sunyani and I intend to die here. I want my children to have the very best right from here without having to travel out of town.”

”We have been quiet for so long and have been taken for granted. This is our own way of demanding our fair share of the national cake, which we rightfully deserve.”

In September 2021, The Chinese contractors working on the rehabilitation and expansion of the Sunyani inner-city roads said the project is costing the government of Ghana US$45 million dollars.

They promised to deliver quality work to meet international standards and assured to complete the project as scheduled, despite some emerging challenges.

Vice President Alhaji Dr. Mahamudu Bawumia cut the sod for the work to begin on the 29-kilometre Sunyani town roads in September 2020.