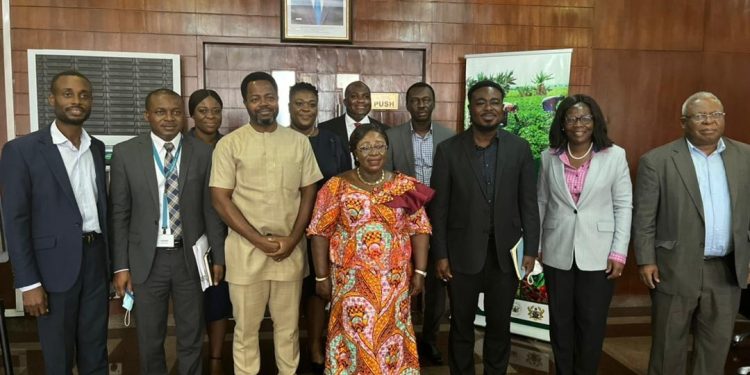 The Chief of Staff at the presidency, Frema Opare, has tasked a Deputy Attorney General, Diana Asonaba-Dapaah, officials from the Finance Ministry, and other government officials to draw up an action plan to systematically implement key recommendations emerging from a 20-year review of judgment debt payments in Ghana conducted by the Centre for Social Justice.

She made the comments when she received a delegation from the Centre for Social Justice (CSJ) at her office at the Jubilee House in Accra.

The CSJ presented the Chief of Staff with a copy of a judgment debt report prepared by the Finance and Economy Pillar of the Centre.

The report, which is entitled “A 20-year review of judgment debt payments in Ghana: impact, causes and remedies” catalogs the incidence of Judgment debts in Ghana from 2000 to 2019.

Present at the meeting were representatives of the CSJ, the Chief of Staff and her deputy in charge of operations, the Chief Director at the Office of the Chief of Staff, Deputy AG and Minister for Justice, and the Directors of Budget and Legal Departments of the Ministry of Finance.

Presenting the report, the Council Chairman of the CSJ, Dr. Sodzi Sodzi-Tettey, said that the report details the causes of judgment debts over the period, the various categories of the judgment debts, and offers recommendations for the avoidance of such incidents in the future.

He noted that funds lost to the state due to the payment of such debts are resources that could otherwise have been utilized for national development.

Dr. Sodzi-Tettey recommended a bipartisan process leading to a government judgment debt framework with specifications for how governments enter into, continue, or abrogate contracts entered into by predecessor governments, with judgment debts associated with political transitions accounting for over 70% of the reviewed judgment debts.

The CSJ also recommended an inter-ministerial committee of the Finance Ministry and the Attorney General’s Departments to take stock of all judgment debts and work collaboratively to either fight them robustly in Court or arrange feasible payment terms as needed.

The Deputy AG & Minister for Justice in charge of Civil Cases, Hon. Diana Asonaba-Dapaah, informed the meeting that her office had put in place several measures since 2016 to reduce the award of Judgment debts, including the assignment of five senior lawyers to key ministries to help in the thorough review of contracts before signing.

Hon. Asonaba-Dapaah also mentioned the government’s strategy to depart from the practice of using inexperienced lawyers rather than senior lawyers to contest judgment debt cases.

Finance Ministry officials also bemoaned the fact that in most instances, they are the last to hear of these cases after Courts have ruled, and government accounts are being garnisheed. As a result, they have become even more proactive in making strong legal representations as soon as they hear of these judgment debt cases in court.

The Chief of Staff described CSOs as important actors in any democracy, as they play a critical role in ensuring government accountability and also contribute to policy formulation and implementation.

She however charged CSOs to also applaud the government when it is on the right track, as a form of encouragement.

She requested the CSJ to track government progress on actions to curb the judgment debt problem.