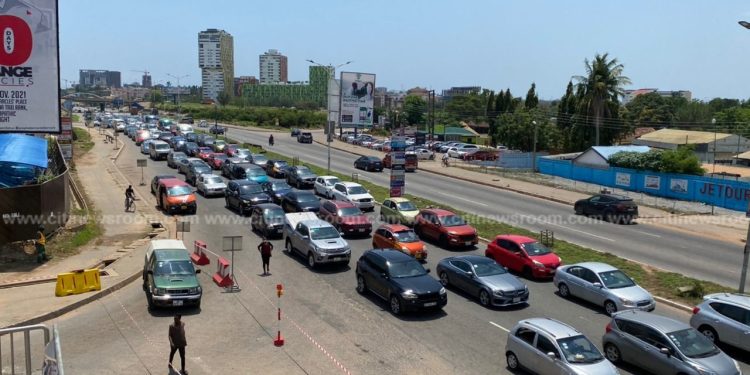 There is nothing like a safer month on Ghana’s roads. Nevertheless, the roads tend to be deadlier in December, which also is the month of Christmas–the annual festival Christians commemorate the birth of Jesus Christ. In 2016, for instance, more road deaths (243) and injuries (1, 018) occurred in December than every other month of the year. (January: 127 deaths and 753 injuries; March: 153 deaths and 827 injuries; June: 140 deaths and 846 injuries; August: 177 deaths and 916 injuries).

The annual rise in road fatalities in December is often blamed on evil spirits.  For instance, one renowned pastor recently claimed on a national radio that

“They [referring to evil spirits] influence driver[s] to sleep or sometimes cause a tree to suddenly appear in the middle of the road and the only person who sees that tree is the driver. In an attempt to avoid hitting the tree, the car veers of the road and run into a ditch. These are manipulations of evils spirits”.

Special ‘prayers’ and other similar events are often organized to seek divine intervention to make the roads safer. Some drivers and passengers carry charms and other superstitious items when travelling. Others ‘anoint’ their bodies and cars with ‘special’ oils or resort to other similar measures for protection. These interventions might be effective but the fact that more and more road fatalities continue to occur annually suggests that a lot more needs to be done to address the menace effectively.

It does not seem we are ditching the imperial planning laws and land-use systems we inherited from our colonial experience anytime soon. This planning system and land-use pattern is, however, problematic because it separates home from jobs, services, businesses and other things that matter to people’s lives, and also concentrates them in a few parts of the country. The result of this is that people are encouraged or forced to travel more to the few places where businesses, jobs, services and trade are concentrated.

Meanwhile a few transport options exist. Only 5% of domestic travels in Ghana are made by rail, air and inland water transports. The rest (i.e. 95%) are by road. Road transport experience in Ghana even on a ‘normal’ day is hardly pleasant. The state of the roads leaves much to be desired. One commentator described Ghana’s roads as ‘the longest coffin’ in the country. Heavy congestion (popularly called go-slow) encourages reckless driving among both private and commercial drivers. Pressures to do more trips and generate more revenues incentivize commercial drivers to be even more reckless.

The Motor Transport and Traffic Directorate (MTTD) of the Ghana Police Service has a duty to enforce traffic laws and bring the problem under control. The experience, however, has been that most of them just go to the roads to extort bribes from drivers with the result that the fear of punishment has done little to improve drivers’ behavior. This is changing though; nowadays, the Police appears to be doing a lot better with enforcing road traffic regulations.

When all these problems are placed within the context of how December, the month of Christmas, generates enormous trips, it becomes easy to understand why more crashes occur during that time of the year. First, more cars are put on the roads, which, in turn, worsens the congestion on the roads. The resulting frustration encourages drivers to employ aggressive driving practices such as over speeding, dangerous overtaking, driving on roadsides to make up for lost time in traffic or to beat potential traffic ahead of them, leading to collisions, pedestrian knockdowns and other troubles.

Getting home in one piece this year

As I have shown elsewhere, the drivers of road miseries in Ghana are structural. Addressing them will require more careful and systematic broad-enough societal level interventions including dismantling the existing planning and land-use patterns; reforming the inefficient public transport sector; prioritizing investments in non-motorized transport systems (such as bicycle lanes and walkways); addressing driver exploitation to reduce incentives for aggressive driving to meet revenue targets. But those are things for tomorrow–medium to long term interventions.

Christmas is just around the corner. What can we do as pedestrians, passengers, drivers, car owners/transport companies and as government to reduce road carnage in the country this year? Here are a few suggestions.

A shown earlier, Christmas generates a lot of activities, and, therefore, more movements and traffic. So if you have a personal car, plan your trips ahead of time and leave home early enough. This way, you can make it to your destination without the need to rush. As a pedestrian, keep in mind that, at this time of the year, you are going to share the roads, roadsides and such public spaces with drivers who want to cut down delays and move as quickly as possible. They are likely to be more careless. So, be extra vigilant in crossing or walking around roads and other similar places you share with cars, motorcycles and other vehicles.

As a passenger, allow more time for your trips. This way, you won’t be baited by the fear of lateness to pressurize drivers to increase speed on the road or accept to be overloaded. Remember, over speeding and overloading kill. Resist them! The advice similarly applies to drivers and car owners. Christmas seasons, undoubtedly, are your cocoa seasons: the time you could make more money. However, if you drive for someone or a transport company, it won’t take long for them to replace you with another driver if you die or suffer any injuries. So rest more and be more careful on the road. There is no question that the economic pressures are real. But, then, for what does it profit a driver if he makes more money and dies or ends up spending it in hospital fees? Be guided by this.

To car owners and transport companies, your vehicles are assets only when they are not damaged. So, prioritize maintenance and safety. A special caution to Okada users and drivers: The National Road Safety Authority (NRA) estimates that the chance of dying from a motorcycle crash in Ghana is 10 times higher than a car crash. There could not be a better time for you to be more careful. Personal responsibility is obviously important, but public agencies and officials have a major role to play. The Government must leverage the recent surge in public respect for the police to make the roads safer. Section 118 of the Road Traffic Regulations of 2012 (LI 2180) provides that:

‘A person or an owner of a motor vehicle shall not drive or cause or permit another person to drive a commercial vehicle (a) for a continuous period exceeding four hours; or (b) for a period amounting in the aggregate to more than eight hours in a period of twenty-four hours or five hundred kilometers whichever comes first’.

This is a very good law that could be timely leveraged to reduce fatigue/drowsy driving–one of the major factors causing troubles on the highways in recent times. In conclusion, evil spirits may exist and they may actually be part of the reason Ghana’s roads become deadlier, particularly, in festive seasons. However, careers spent in road safety research and practice have shown that, it does not matter the time of the year or the types of spirits that operate in particular societies, controlling risky use of roads and vehicles through defensive driving, adequate vehicle maintenance, regulation enforcement and other similar means often help to reduce road fatalities. Let’s do more of that this Christmas. Hopefully, we may be able to beat the evil spirits this year.

The writer, Festival Godwin Boateng, is a postdoctoral research scholar at the Earth Institute of Columbia University-New York. He could be reached at: bfsvl1988@gmail.com.