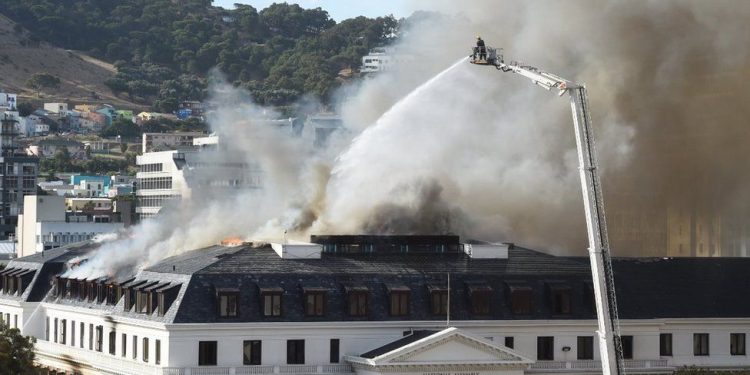 A devastating fire which swept through South Africa’s parliament in Cape Town reignited just hours after it was said to be under control.

Flames were seen billowing from the building’s roof on Monday, as firefighters tried to douse the blaze.

The fire first broke out on Sunday and completely destroyed the National Assembly, or lower chamber.

Police have arrested a suspect who will appear in court on Tuesday on charges of arson, housebreaking and theft.

Authorities had warned that flare-ups would be possible because of carpets and wooden floors in the building, with parliamentary spokesman Moloto Mathapo telling South Africa’s TimesLive some firefighters had “worked throughout the night” to try and prevent further blazes.

But just 12 firefighters were on site when the wind reignited wood above the National Assembly on Monday, according to news agency AFP. Despite reinforcements being sent, flames could still be seen emerging from the building as night fell.

An update from the city council at 22:00 local time (20:00 GMT) said the building’s fourth and fifth floors had been completely destroyed. It was not immediately clear if the blaze had been extinguished.

On Sunday, President Cyril Ramaphosa – who admitted the building’s sprinkler system had not functioned properly – praised firefighters for responding to the “terrible and devastating event” in minutes.

Government minister Patricia de Lille separately admitted that CCTV cameras were not being monitored at the time the initial fire started.

Ms de Lille said Sunday’s fire had led to the “complete burning down” of the National Assembly chamber. Other areas of the parliamentary complex – parts of which date back to 1884 – were also badly damaged.

The parliament is not currently in session because of the holidays, and no-one was injured.

The building is home to thousands of treasures including historic books, photographs and important works of art, which officials said had been saved.

There had been particular concern that the valuable Keiskamma Tapestry, which is 120m (394ft) long and documents South Africa’s history, may have been damaged or destroyed.

The Houses of Parliament in Cape Town are made up of three sections, with the oldest dating back to 1884. The newer sections built in the 1920s and 1980s house the National Assembly. The government is based in Pretoria.

Mr Ramaphosa on Sunday spoke of his sadness at “this destruction of the home of our democracy”.

Parliament said “all efforts” would be made to limit any disruption to its work, but it is expected to be many months before the building can be used again.

Cape Town Mayor Geordin Hill-Lewis said the city’s council chamber would be made available as an alternative place for parliament to meet.

It was the second fire at the parliament in under a year. In March there was a fire caused by an electrical fault.

Last year, a wildfire ravaged part of the University of Cape Town’s library, which was home to a unique collection of African archives.