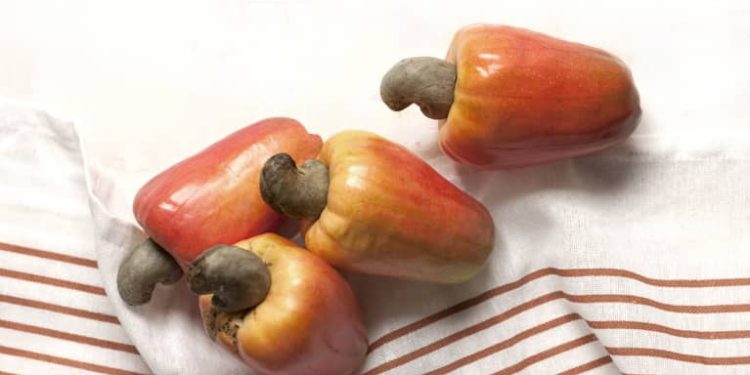 Over the years, cashew has become a very important agricultural commodity, in terms of economic contribution through revenue generation, job creation, and reducing poverty in these countries and beyond.

Because of the many health benefits due to its rich nutritional content, cashew is consumed across the globe, especially in India, Europe, and America.

It is necessary to establish that, the cashew fruit is made up of two parts: the cashew nut and the cashew apple. Both the nut and apple are edible.

However, unlike cashew nuts which are consumable only after it has been processed, the cashew apple can be eaten in its raw form.

In her article “Are cashew poisonous: all you need to know”, Plant-Based Lifestyle Strategist  Lauren Panoff, highlighted the many health benefits of consuming cashew, including controlling sugar levels in people with Type 2 diabetes.

While her article focused on examining the risk of toxicity of cashew nuts, it recalls the very popular and old belief in Ghana and some African countries that, eating cashew apple and immediately taking milk is very poisonous.

As old and primitive as this belief may seem, a lot of people have been hugely influenced by it to avoid eating cashew apples.

This article examines if there is any truth in this wide belief, where it came from, the impact this is having on the cashew industry and the health benefits of the cashew apple.

Historical perspective of how this belief came about

Cashew, according to the Red River Feeds, is native to the northeastern part of Brazil. In the mid-1500 during the industrialisation period in Europe, through the exploits and trading activities of Europeans, particularly Portuguese explorers and traders, cashew was introduced to India and the eastern coast of Africa, a place now known as Mozambique.

According to them, the tree was spread across the eastern coast to places such as Tanzania, and Kenya. It was later introduced to the western coast of Africa, where it now grows in places such as Senegal, Nigeria, Ghana, Cote d’Ivoire, and other countries.

Finding a clear history of the widespread belief that eating cashew fruit and milk is poisonous, in most African cashew producing countries, have proved difficult since it was based mainly on speculations and hearsay.

However, a Ghanaian cashew farmer with great experience in cashew production, currently a Board member of the Tree Crops Development Authority (TCDA) representing cashew producers, Chief Adams Tampuri, narrates that, during the 1960s there was very little knowledge or sufficient research findings on the economic, health and environmental benefits of both the cashew apple and cashew nut.

“As a result of this, the areas where cashew was known to, the people attempted in many ways of consuming both the apple and the nut. The nuts were traditionally roasted in fire, cracked and the kernel extracted from the shell and consumed. The acidic liquid from the shell was also used for tattoo decorations on human bodies. The apple was also consumed by people from time to time,” he highlighted.

However, due to the inadequate knowledge of the use and consumption of cashew, the acidic liquid “caused blisters on the lips of consumers who did not carefully extract the kernel from the shell”.  Also, according to him, many people, especially children, who harvested and consumed the fruit prematurely had health issues.

“Just like any other premature fruit such as mango, it is very harmful to the body when consumed. The consequence of consuming premature cashew apples can result in burns or blisters around the lips which could develop into sores. Children were the most affected because [they harvested and consumed] cashew apples in the wild or from abandoned orchards without supervision,” he said.

The belief that eating a cashew apple and taking milk afterwards is poisonous, according to him, came about because parents used it to scare and discourage their children from eating premature cashew apples.

“To discourage children, especially infants breastfeeding, and adults who were not familiar with the cashew apple, parents whose children suffered from consuming premature apples came out with this scary story,” he explained.

Any truth in the belief?

The study, therefore, shows that cashew apple juice and milk are compatible.

Burkinabe cashew food safety expert and consultant with the African Cashew Alliance (ACA), Mahamadou Werme, explains that though many people across cashew producing countries in Africa believe in this old misconception, from his many years of experience in cashew food safety, no truth has been established.

“I can say that I have never seen someone hospitalized or die because of eating cashew and drinking milk and from my enquiries, no one has confirmed any truth in the belief,” he said.

Stressing on the nutritional benefits of the cashew apple, he believed it was unfortunate that people refuse to consume it because of the misconception.

“Scientists and professors at the Kwame Nkrumah University of Science and Technology (KNUST) have conducted several types of research into this issue and I can tell you that there is no scientific proof that eating cashew and milk is poisonous,” he said. “I have been in the cashew industry for over 40 years. I eat a cashew apple almost every day and drink tea with milk alongside. From personal experience, it is a misconception with absolutely no scientific proof,” he added.

Chief Adams further indicates that “at the moment, countless cashew farmers, including my good self, have intentionally carried out personal experiments by consuming milk and immediately consuming matured cashew apple juice without any side effect”.

“The difference here is ‘matured [cashew] apple juice versus premature apple juice’. Note that none of the experiments was conducted with premature cashew apple juice,” he emphasized.

Health benefits of cashew apple juice, how the misconception has affected consumption and the impact on the cashew industry

Cashew apple juice is a rich source of nutrients including Vitamins A, B, and C, iron, calcium, mineral salt and contains other very important antioxidants that the human body needs. Research shows that cashew contains five times and twelve times the vitamin C content of oranges and pineapples, respectively. It also contains some amounts of proteins and fermented sugars required by the human body.

However, among other things, the misconception about cashew apple has resulted in low patronage of cashew fruit in many African countries. Chief Adams bemoans that, though people know the benefits of consuming cashew apples, many are sceptical about the health implications consuming it might have on them. This, he explained, is having a huge effect on sales of cashew apples.

“The [cashew] apple is a huge potential market for cashew farmers if the public can be convinced to patronize. The apple is perishable and cannot be stored for a long period of time, so immediate sale to the public is required after harvest,” he said.

Also, the low patronage of cashew apples has a huge impact on the cashew industry in general. Producers have to depend on the nuts to recover their cost of production. They are therefore forced to demand high prices from traders and processors, which they mostly do not get.
This explains why it takes an African cashew farmer many years to break even and make some profits.

Unfortunately, this misconception, as Chief Adams asserts, has reduced interest and commitment by cashew farmers, processors, and potential financiers to invest in processing the cashew apple for public consumption.

Africa has a very promising cashew industry. To be able to leverage and get the best out of the industry, it is important for the production, processing, trading and consumption of both cashew nuts and apples to be encouraged.
Local consumption of cashew should be encouraged by both governments and stakeholders of the industry. Education to dispel the misconceptions and misinformation about cashew, as well as highlight the health benefits of eating both the cashew apple and nuts, are necessary.