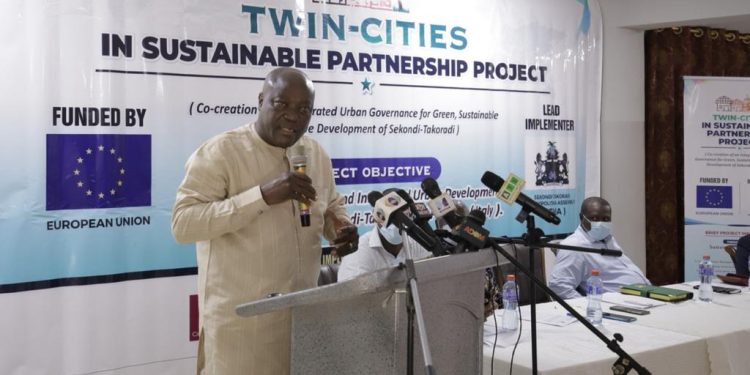 The Sekondi-Takoradi Metropolitan Assembly with funding from the European Union is to plant 5,000 fruit trees in the metropolis under the assembly’s Twin-Cities in Sustainable Partnership Project to among other things ensure food security in the metropolis.

The project, which is to be launched by 17th February 2022, is categorized under three clusters of activities namely Multi-level Urban Governance, Cultural-Sensitive and Inclusive Urban Strategies and Urban Climate Change Resilience.

Speaking at a press briefing on the project in Takoradi, the MCE of STMA, Abdul Mumin Issah, said the project, which is to be to implemented within the next three years, is a partnership between the cities of Sekondi-Takoradi and Perlemo in Italy but with a €3million funding from European Union.

“The Assembly and its partners were competitively selected to benefit from Three Million Euros (€3,000,000.00) grant from the European Union, which was approved in October 2021, to implement interventions meant to improve urban management, foster transnational cooperation, enhance socio-economic development through employment creation, and to generate value from the cultural heritage of both Cities (Sekondi-Takoradi & Palermo).”

“The collaboration between the partners in project implementation is geared towards co-creating an Integrated Urban Governance for Green, Sustainable and Inclusive Development of Sekondi-Takoradi, as well as strengthen the twinning relationship that began with the city of Palermo”, he said.

Emphasizing the importance of the project and the relationship with the city of Parlemo, Abdul Mumin Issah also urged the media to support the project to achieve its success.

“It is our expectation that through your various medium, you will share with the people of Sekondi- Takoradi and beyond, the positives or advantages the project stand to deliver. We will count on the support of the media to collaborate with the Assembly and its project implementing partners to bring the expected change in improving urban governance, adopt climate-resilience strategies, enhance the entrepreneurial skills of our youth, create employment, develop and implement sustainable measures to address issues confronting the vulnerable, deprived and marginalized groups.”

“It is worthy to mention that the Assembly consciously set the project’s expected outcomes to align with its Medium-Term Development Plan of building a prosperous society, creating opportunities for all and safeguarding the natural environment, and ensuring a resilient built environment. To this end, the Assembly will require the total support of all stakeholders to turn around the fortunes of the Twin-City”, he added. 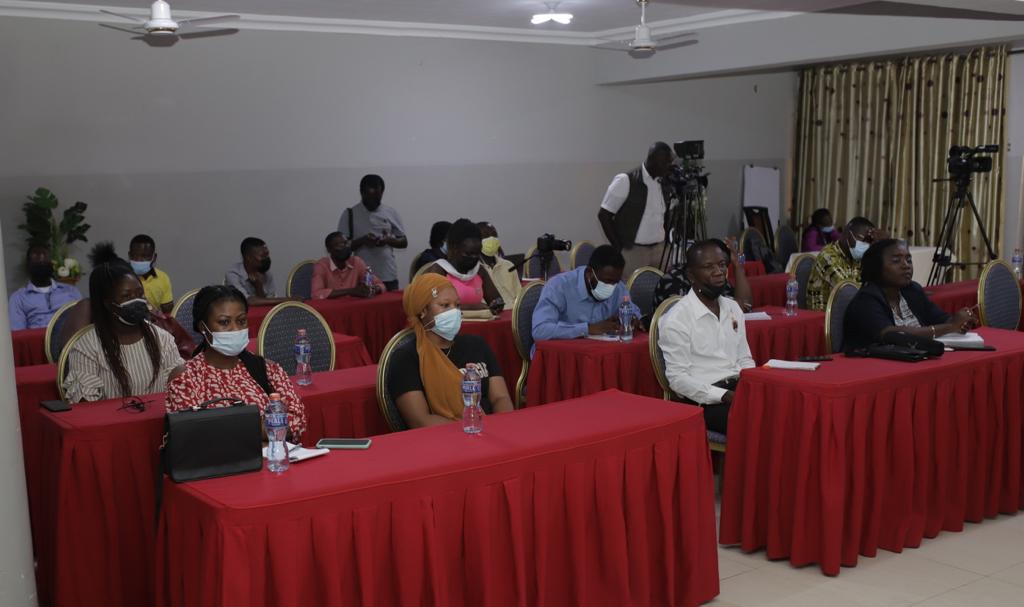 The Coordinator for the Twin-Cities in Sustainable Partnership Project, Isaac Aidoo, breaking down the activities under the three cluster of the project said apart from the 5,000 fruit-trees to be planted, other activities will also create employment for many including the vulnerable.

“Under the cultural sensitive and inclusive urban strategies cluster, we will construct demonstration farms, equipped with a greenhouse and irrigation facility. We will also train 50 vulnerable groups including fisherfolk, 50 Small-holder Vegetable Farmers and 200 unemployed women and youth in Urban Agriculture. This project will also provide decent toilet facilities for 500 housing units to benefit poor households improving sanitation and health as well as institute public health behavioural change campaigns on WASH and COVID-19“, he said. 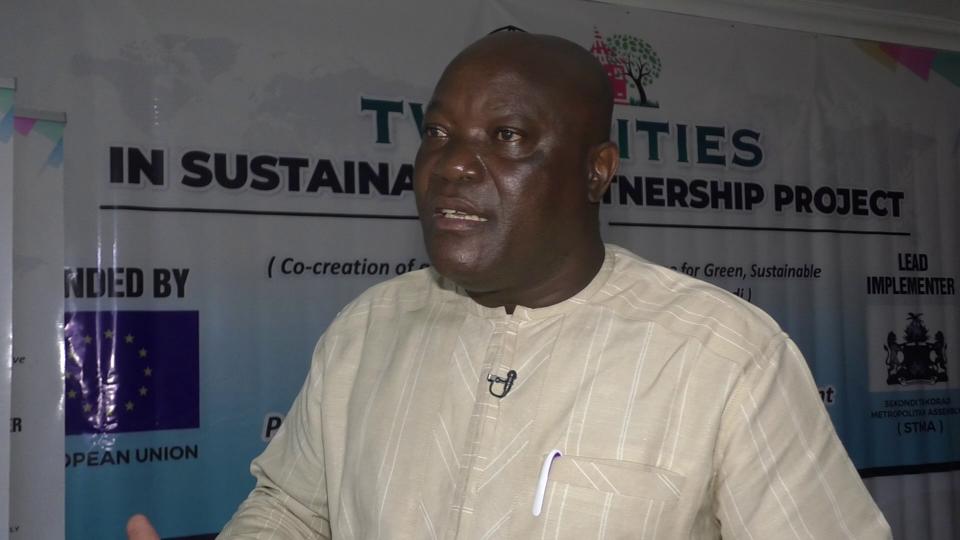 Isaac Aidoo added that Urban Climate Change Resilience cluster of the project will focus on climate issues with the involvement of schools.

“The project will have public consultations with local communities on climate resilient local public policy and preparation of an eco-Disaster Risk Reduction Management Plan. Also, 5,000 ornamental trees would be planted to address environmental degradation and mitigating the adverse effects of climate change on livelihoods at the community level. This would be made possible with climate-resilient schools’ educational campaign, development of a Skills and Entrepreneurship Training Centre on Climate-Smart Production Technologies and Green Building”.

“There would also be skills development training for 150 unemployed youth and women in green social enterprise as well as pilot of community-based production of 100 eco-friendly ovens“, he added. 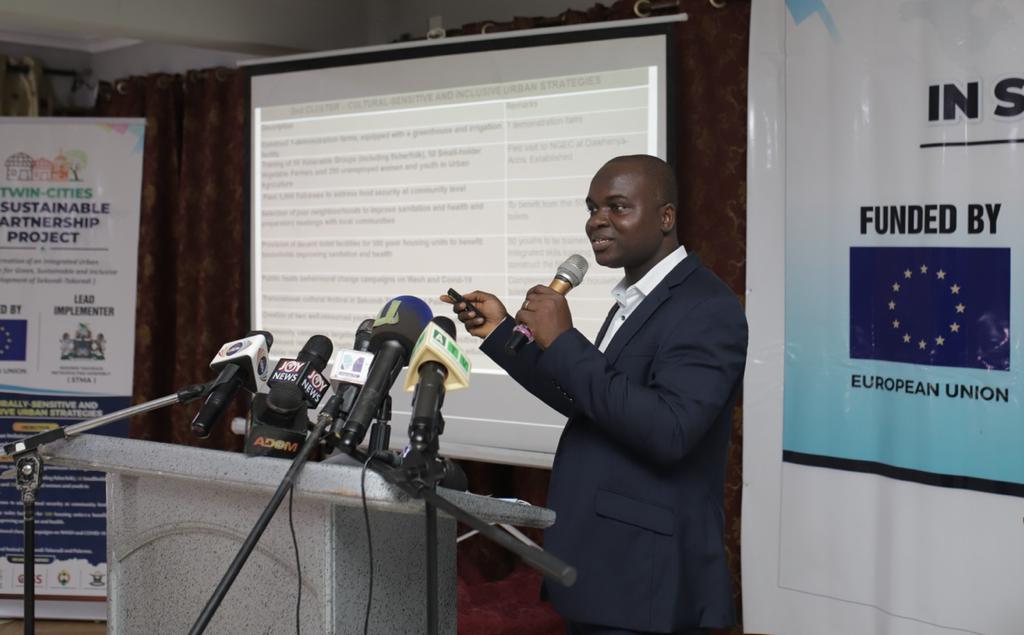 The Project Coordinator further added that the Twin-Cities in Sustainable Partnership Project will embark on widespread capacity building under the Multi-Level Urban Governable Cluster.

“We will implement training of 150 members of Metropolitan Planning Coordinating Unit, Spatial Planning Committee and Stakeholders in Integrated Urban Governance and Spatial Planning, coupled with Co-creation of 10 Community-based Local Plans. Representatives of 40 multiple stakeholders and 60 community leaders will also be trained on social accountability tools”.

“We will also conduct a multi-dimensional baseline survey on integrated urban development among local citizens through the STMA’s e-Governance platform…Organization of quarterly awareness events on municipal rates and fees to enhance revenue generation and transnational exchange visits to strengthen the twining-relationship between the cities of Sekondi-Takoradi and Palermo-Italy”, he noted.

The €3million Twin-Cities in Sustainable Partnership Project will have a counterpart funding of 5% from the STMA.

The Presiding Member of the Sekondi-Takoradi Metropolitan Assembly, John Buckman, also speaking at the press briefing which paved way for journalists to seek clarity on the project urged all stakeholders to embrace it and contribute in whatever way possible for the realization of its intended benefits.

Nominees of 2022 Entertainment Achievement Awards to be announced on Feb. 8