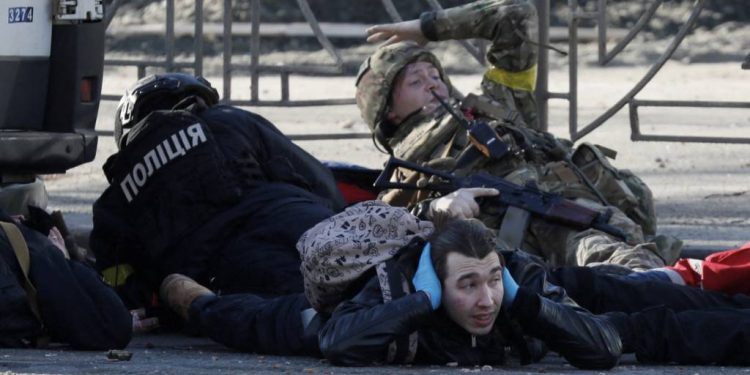 Russia is striking civilian targets in Ukraine, including hospitals, nurseries, and schools, the Ukrainian deputy prime minister has said,

Olha Stefanishyna told the BBC that, after “strong resistance” from the Ukrainian army, there was an “enormous operation” by Russia against civilians.

She accused Russia of a “terroristic plan”, with attacks coming from the air and also by land.

“The WHO has confirmed several attacks on health care in Ukraine, causing multiple deaths and injuries,” the WHO director-general Tedros Adhanom Ghebreyesus said on Sunday.

The British government has accused Russia of targeting populated areas “in multiple locations”.

“Russia has previously used similar tactics in Chechnya in 1999 and Syria in 2016, employing both air and ground-based munitions,” the UK said in an intelligence update.

On Saturday, UN monitors said 351 civilian deaths had been confirmed in Ukraine since the invasion began on 24 February, but the real figure was likely to be “considerably higher”.

The UNHCR said more than 1.5m people have fled Ukraine since Russia invaded.

But Russia denies targeting civilians – saying it is carrying out a “special military operation” against Ukrainian “nationalists” and “neo-Nazis”.

Meanwhile, more than 1,700 people were detained across 44 Russian cities on Sunday at anti-war protests, the monitoring group OVD-Info said.

Ms Stefanishyna – who was speaking to BBC TV’s Sunday Morning programme – accused Russia of “military tactics right in the cities of Ukraine”.

“Shelled hospitals, the shelled houses for kindergartens and schools, and the ordinary households,” she said. “This is how the reality looks.”

She said Ukraine was seeing “another wave of implementation of this terroristic plan of [the] Russian Federation”.

Ms Stefanishyna claimed Russia was suffering “enormous losses” of soldiers and equipment, but this “does not deter Russia”.

“It only encourages further aggression,” she said.

Attacking civilians and civilian infrastructure – such as schools and hospitals – is against the Geneva Conventions, which are treaties agreed by all countries that are supposed to regulate war.

As well as the WHO, other non-government organisations have also reported attacks on civilian targets.

Amnesty International says it has verified various attacks – including cluster munitions hitting a kindergarten and nursery, and a ballistic missile hitting a hospital.