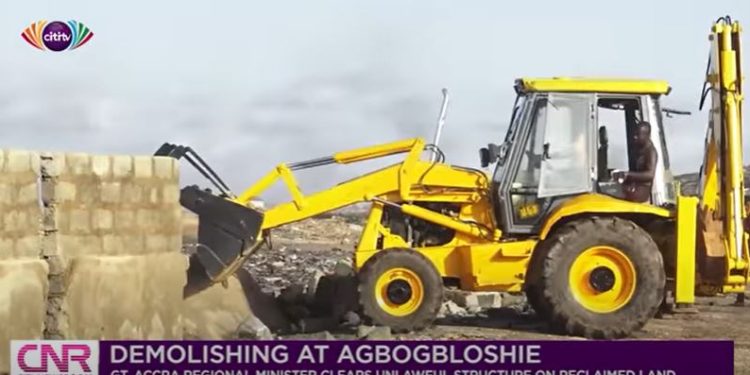 The Greater Accra Regional Minister, Henry Quartey has led a team to demolish a fence wall erected on sections of the reclaimed Agbogbloshie land.

The minister on July 1, 2021, relocated the onion traders from the Agbogbloshie market to decongest the city and also help in dealing with the sanitation conditions in the capital.

The area, however, is still battling with filth on a daily basis despite warning signs of a prohibition on the dumping of waste at the site.

Some unknown persons had also constructed a fence wall on portions of the land.

The Greater Accra Regional Minister, Henry Quartey ordered that all the fences be demolished.

“I had hints that some people have erected some fence walls, showing me pictures. During the exercise on July 1, 2021, I said, ‘if they come a hundred times, we will move them a hundred times.’ So far as I am concerned, the government hasn’t sold lands to anybody. Also, the technocrats should help prevent those without permits from erecting anything on unauthorised areas from the onset even before it gets to a point where we will have to come to demolish them, making us look evil.” The Greater Accra Regional Minister, Henry Quartey is on a sanitation spree, where he wants to make sure the president’s dream of making the capital city the cleanest becomes a reality.

The sector minister on April 20, 2022, inaugurated 1000 personnel, known as the “city response team” to help enforce the laws on sanitation that have been set.

They will make sure the “Operation Clean Your Frontage” works, and also that traders will not sell on the pavements.

'Slow down with calls for constitutional amendments' - Ayikoi Otoo