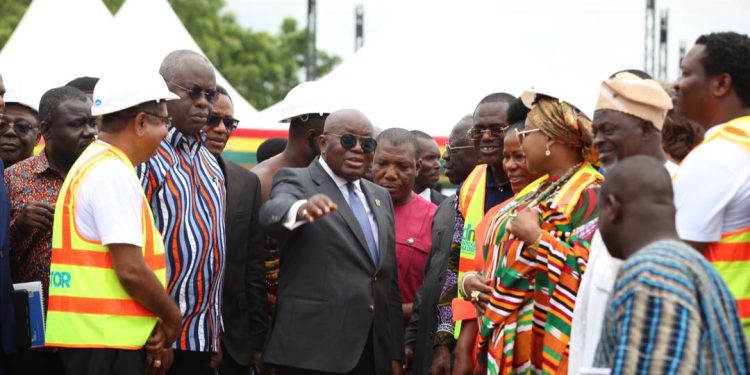 President Nana Addo Dankwa Akufo-Addo has directed Metropolitan, Municipal, and District Assemblies (MMDAs) in the Greater Accra Region to demolish all structures that cause flooding in the city.

The President says Metropolitan, Municipal, and District  Chief Executives (MMDCEs) should immediately pull down all such structures to reduce the occurrence of flooding in Accra.

“MMDCEs have been charged to ensure that obstructions to the free flow of water as well as developments on waterways are removed immediately. MMDAs are also to ensure the strict adherence to developments in the planning laws of the country and sanction staff who issue permits for structures to be put on waterways to serve as a deterrent for those who engage in such acts”, Nana Akufo-Addo ordered.

The onset of the rainy season has seen many parts of Accra inundated, with several homes counting their losses after floodwaters destroyed a number of properties.

Speaking at the commissioning of two IHC Beaver 50 dredgers and marine equipment of Dredge Masters Limited (DML), a subsidiary of the Jospong Group of Companies (JGC) in Accra, Nana Akufo-Addo said flooding in Accra must end.

“We will ensure that these directives are complied with. I have established a monitoring unit, and they will be reporting directly to me on the progress of the implementation of these measures. I am putting all MMDCEs on notice and will be held responsible for any breaches that result in damage as a result of flooding.”

This came after most parts of Accra got flooded after close to a 10-hour downpour last Saturday.

Residents in hard-hit areas had to abandon their homes to seek shelter elsewhere because the floodwaters entered their rooms.

The President also advised against the disposal of waste in drains, which he says is one of the contributory factors compounding the unfortunate situation.

“As President, I will not allow the selfish interest of a few to jeopardize the collective future of the rest of us. While the government does its part, we cannot overlook the negative effect of dumping of refuse into open drains by some unpatriotic citizens.”

“Regardless of the investment in the construction and re-engineering of open drains, the indiscriminate disposal of solid waste into open drains and channels will reduce our capacity to end the perennial flooding. I urge all those who engage in such practice to put an end to it”, Nana Akufo-Addo added.

The National Disaster Management Organization (NADMO) has already admitted, that its inability to demolish illegal structures on waterways is one of the major setbacks to ensuring a more sustainable way of tackling the recurrent flooding situation in the country, especially in the capital, Accra.

NADMO is therefore seeking the needed empowerment through legal backing to enable it to do so if Ghana is bent on bringing an end to its perennial flooding situation.

“Everything boils down to the assemblies. There are a number of illegal structures put up all over, but it is not the mandate of NADMO to demolish them. That is the problem we have,” says Abu Ramadan, NADMO’s Deputy Director-General.

He suggested that the time is ripe for NADMO to be given the needed powers to pull down structures obstructing the free flow of water since local authorities have done too little in that respect.

“For us as a coordinating agency, there isn’t so much we can do. We can only advise or proffer solutions and facilitate. If the law has given us the power to move an excavator to go and demolish buildings, I believe we would have done that”, he stressed.