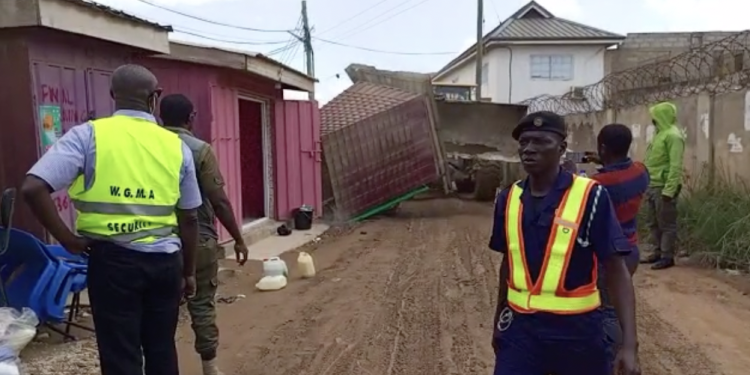 A taskforce from the Weija Gbawe Municipal assembly has demolished several temporary structures, including portions of ‘London bar’ – a popular nightclub in the area.

The move, according to the assembly, is in line with President Nana Addo Dankwa Akufo-Addo’s directive for the demolition of all structures built on waterways to prevent flooding.

Speaking to Citi News during the demolition of structures along the old barrier stretch, the Municipal Chief Executive, Patrick Kumor, indicated that ample time was given to affected persons to relocate.

The MCE also promised to crack the whip on Assembly staff who relinquish their duties, leading to the springing up of unauthorized structures.

“We have done a similar exercise before, but you ask how the structures got there again? The assembly will have to blame itself because we have a taskforce that is expected to make sure that, we monitor all these activities. So after this exercise, we will have to look in-house to ensure that my taskforce is up to the game to ensure that these persons do not return to those areas. So I am sending a clear warning”, he cautioned.

The Assembly says it will soon embark on another demolition to pull down permanent structures built on waterways in the next phase of the exercise.

The team, led by Municipal Chief Executive Patrick Kumor, did not spare any structure that had impeded right of way and is a potential threat to causing flooding when it rained.

Some affected persons shed tears as their properties were pulled down.