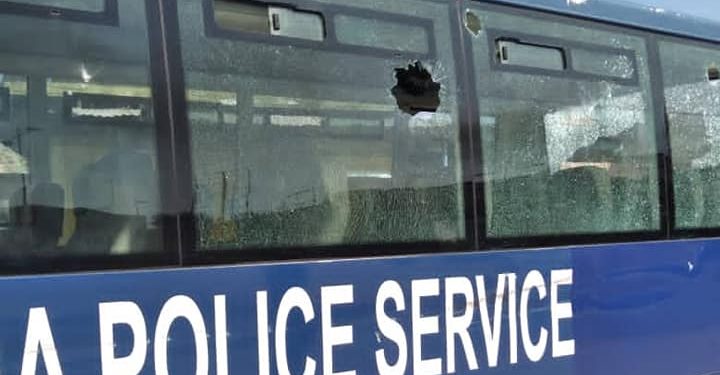 The Ghana Police Service has described as shameful, attacks on its officers by Arise Ghana demonstrators.

It said demonstrators pelted its officers with stones at the Obra Spot at the Kwame Nkrumah Circle, where the demonstrators had converged for the protest.

The protest, which started earlier in the day on Tuesday, June 28, 2022, turned violent after disagreements between organizers of the demonstration and the police over routes the group will take from their converging point.

Some police vehicles were destroyed in the process and some officers sustained physical injuries.

The Police Service in a tweet on the development, said, “Attack on Police in the Ongoing Arise Ghana Demonstration. What a shame, we were there to protect you and ensure your safety, but you throw stones at us, injure and hurt us. This behaviour is unacceptable and must be condemned.”

Scores of demonstrators have been arrested by the police.

Police personnel fired tear gas on agitated Arise Ghana protestors during their demonstration, before following it up with water cannons.

But the demonstrators had wanted to march towards the Ako Adjei Interchange with a view of stopping at the Jubilee house.