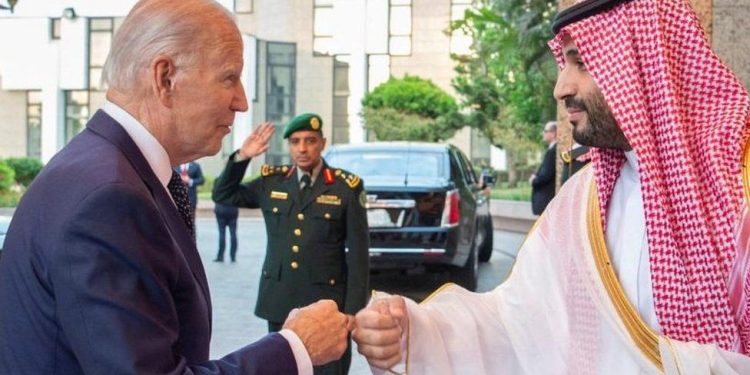 US President Joe Biden says he raised the murder of journalist Jamal Khashoggi during a meeting with Saudi Crown Prince Mohammed bin Salman.

Mr Biden is in Saudi Arabia to rebuild relations, having previously promised to make the country a “pariah” over its human rights record.

He said he had made it clear the killing in 2018 was “vitally important to me and the United States”.

But he also said the two countries reached agreements on other issues.

Mr Biden’s visit has been criticized as validating the Saudi government following the murder of the US-based Saudi dissident journalist Khashoggi in October 2018 at the Saudi consulate in Istanbul, Turkey.

Crown Prince Mohammed bin Salman was accused by US intelligence agencies of approving the murder.

“With respect to the murder of Khashoggi, I raised it at the top of the meeting, making it clear what I thought of it at the time and what I think of it now,” Mr Biden said in a press briefing after Friday’s meeting.

“I said very straightforwardly, ‘for an American president to be silent on an issue of human rights is inconsistent with who we are and who I am. I’ll always stand up for our values’.”

Mr Biden said the crown prince claimed he was “not personally responsible” for the death, the Associated Press reported. “I indicated I thought he was,” the president said he replied.

Prior to the meeting Mr Biden was pictured fist-bumping the crown prince, indicating an apparent warming of relations between the two countries.

But Khashoggi’s fiancée, Hatice Cengiz, criticised the president’s actions. Tweeting a photo of the two men along with the words she imagined her fiancé would have said, she wrote: “Is this the accountability you promised for my murder? The blood of MBS’s next victim is on your hands.”

Meanwhile, the publisher and CEO of the Washington Post, Fred Ryan, said “the fist bump between President Biden and Mohammed bin Salman was worse than a handshake – it was shameful. It projected a level of intimacy and comfort that delivers to MBS the unwarranted redemption he has been desperately seeking.”

Aside from Khashoggi’s murder, President Biden said he and his Saudi counterpart had discussed energy and that he expected to see Saudi Arabia, a major oil producer, take “further steps” to stabilise the market in the coming weeks.

Defending Mr Biden’s actions, US Democratic Congressman Brad Sherman told the BBC that Saudi Arabia increasing its supply of oil to the market would save lives.

“So it’s very easy for Mrs Khashoggi [Hatice Cengiz] can say ‘don’t worry about those hundreds of thousands of people who will die, avenge my fiance’. You’ve got to be adults here.”

Mr Biden also announced Saudi Arabia would open its airspace to aircraft flying to and from Israel, which was previously banned.

COLA may be suspended in future – Gov’t tells organized labour

COLA may be suspended in future - Gov't tells organized labour