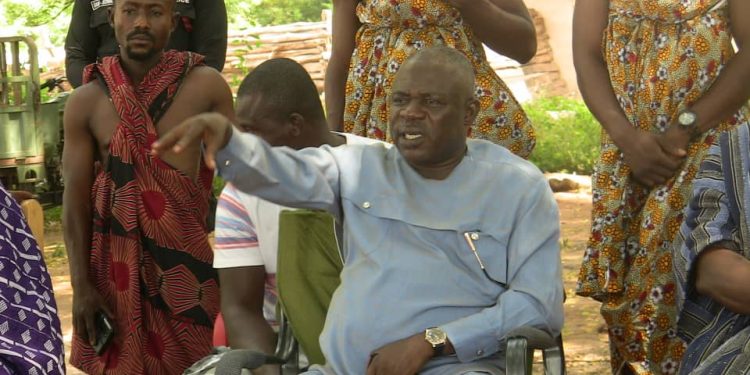 The Chief of Ejura Traditional Area in the Ashanti Region, Barima Osei Hwedie II, has destooled one of his subchiefs for his alleged role in aiding some nomadic herdsmen in suspected armed robbery attacks in the area.

The chief of Miminaso No. 2, Nana Obri Yeboah was destooled on Sunday, November 27, 2022, following the killing of a police constable in the community by some suspected armed robbers.

Ejurahene Barima Osei Hwedie II who moved in to help restore calm called for an emergency meeting with security agencies, chiefs, and residents of Miminaso No.1 and No. 2 where some robbery cases have been recorded in recent times.

At a public forum, some residents accused nomadic herdsmen of being behind the recent crimes recorded in the area.

One of the residents of Miminaso No. 2, while contributing during the forum, claimed he had bumped into some herdsmen who laid ambush and had in their possession AK-47 rifle.

He added that the chiefs and opinion leaders failed to act when he reported the matter to them.

Ejurahene Barima Osei Hwedie II said he had instructed the chief not to allow the herders to settle in the area.

He insisted that his decision to destool the chief was based on the chief’s failure to open up to the traditional council on the presence of the herdsmen in the community.

He directed the Assembly Member of the area, the Zongo chief, and the Chief Imam to be caretakers of the area until a substantive chief is chosen.

Meanwhile, the Police have arrested one person in connection with the killing of a 29-year-old police constable at Miminaso No. 2 in the Ejura-Sekyedumase Municipality of the Ashanti Region.

Police are also on a manhunt to get other accomplices.

The suspect, Salifu Adams and his gang of robbers, allegedly attacked the victim on 25th November 2022 between Miminaso No.2 and Nyamebekyere on the Ejura Nkoranza road.

Police have withheld the name of the deceased until his family is formally notified of his demise.