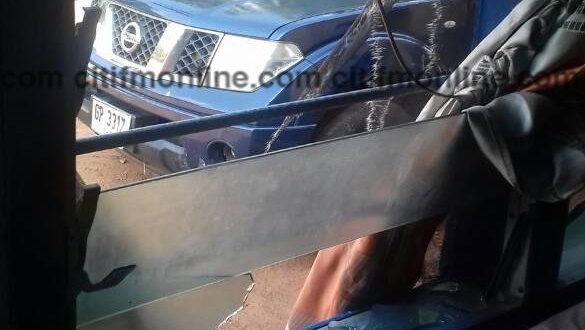 The Police at Ejura Sekyedumase in the Ashanti Region have arrested one person following an attack by some youth on the police station last Thursday.

The Police told Citi News that the suspect, Imadu Sulemana, suspected to have masterminded and mobilized the youth has been detained at the Mampong Divisional Police Command to assist with investigations.

The youth, numbering about 200, attacked personnel on duty demanding that a driver who knocked down and killed three students in an accident be released to them.

The deceased, all students of the Ejura Islamic Senior High School were returning home when the accident occurred.

The youth, who were wielding cutlasses, reportedly pelted stones at the police officers on duty, forcing them to flee to safety. The youth as a result allegedly vandalized items at the charge office among other disruptions.

‘They besiege the Police station all the time’

He said officers who served there were at risk of attacks from the youth especially because they were constrained with personnel.

“All the time, they besiege the police station and the station is now exposed to risks so we are also human beings, we have to be cautious. We are constrained with manpower and we also have families at the barracks so when you come and attack us, we have to protect our families and ourselves,” he added. No cause for alarm- Ejurahene assures citizens

Meanwhile, the Ejurahene, Barimah Osei Hwedie II, has assured residents of Ejura that everything is going to be done to ensure there is justice for the families of the students who were knocked down and killed.

“These are our children and my elders and I will do everything possible to ensure that justice is done. I am meeting with all stakeholders to assess the situation and plan on the way forward,” he added.