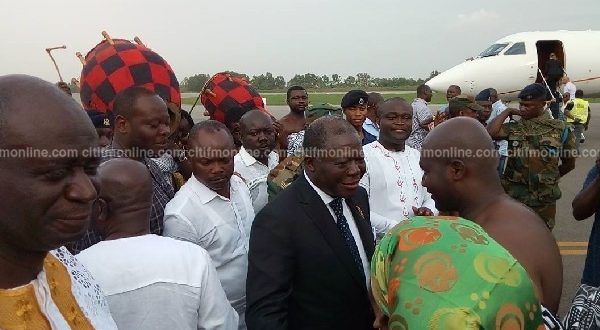 Many individuals including chiefs, government officials and residents, on Saturday, 24th March, 2018, trooped to the Kumasi Airport to welcome the Asantehene, Otumfuo Osei Tutu II back home from his recent international travels.

The Asantehene first visited Malta, and then proceeded to South Africa before his return. Otumfuo and his entourage of chiefs, drummers and traditional poets, were in Malta at the invitation of the President of Malta to grace the Fifth Mediterranean Tourism Forum.

While in Malta, the Asantehene called on the Maltese Government to invest its rich expertise for the mutual benefit of citizens of both countries. Residents and dignitaries including the Ashanti Regional Minister, Simon Osei Mensah, Kumasi Mayor, Osei Assibey Antwi, and other government officials as well as both Zongo and sub-chief in the Asante Kingdom were present to welcome him.

The Asantehene touched down at the Kumasi Airport in a blue-black European suit with golden chain as lapel amidst drumming and appellations from his subjects. He exchanged pleasantries with the dignitaries, chiefs and other youth groups including the Kumasi Youth Association (KuYa). He was driven in a convoy to the Manhyia Palace where he officially greeted the Asantehemaa, Nana Ama Konadu and informed her about his return.