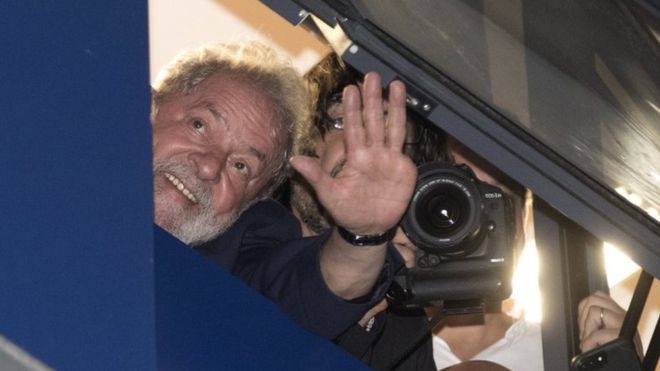 Brazil’s ex-President Luis Inácio Lula da Silva is holed up in a union building in his hometown, outside Sao Paulo, after missing a deadline to hand himself over to the authorities.

The 72-year-old had been ordered to hand himself in to start a 12-year prison term for corruption.

His lawyers are said to be negotiating his surrender with police.

Some reports suggest he may surrender on Saturday, others that he will hold out through the weekend.

Thousands of cheering supporters gathered outside the building in Sao Bernardo do Campo where Lula is staying.

“I think that if the federal police come here now to arrest Lula, they won’t have room [to get in],” Lula supporter Joao Xavier told Reuters.

Authorities have stressed that the left-wing figurehead is not being viewed as a fugitive, as everyone knows where he is.

Brazilian Senator Gleisi Hoffmann tweeted that a Catholic Mass would be said at the metalworkers’ union building early on Saturday, in memory of Lula’s late wife Marisa Leticia who died last year.

Gov’t to facilitate another Christian pilgrimage to Israel Gov't to facilitate another Christian pilgrimage to Israel