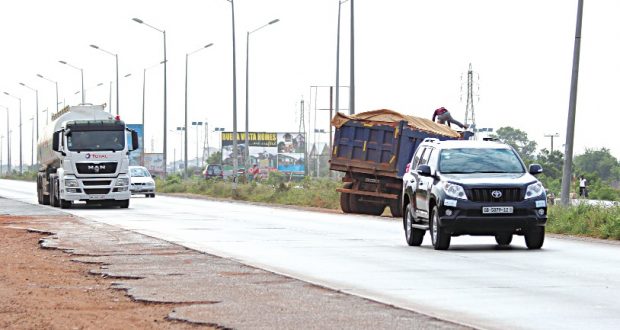 The Ghana Highways Authority has announced that effective Sunday August 26, 2018, it will divert a number of routes on the Accra-Tema Motorway roundabout.

This, according to the Authority, is to prevent heavy vehicular traffic, as the construction of the three tier interchange at the roundabout begins.

[contextly_sidebar id=”uDYjrgF0QwQtm6FvVz4A6Ansv2oSPhXk”] Motorists heading towards places such as Kpong, Akosombo and Aflao, may now have to find alternatives routes along the Motorway through to the end of the roundabout.

In an interview with Citi News, Joseph Yeboah, Project Coordinator at Highways Authority said alternative roads have been made available during this period to ease pressure on motorists.

“To lessen the burden of being in traffic or inconveniencing motorists we have provided all these alternative routes around the roundabout so that motorists can get to their destinations in good time,” he added.

Mr. Yeboah further cautioned motorists to obey road signs as they drive towards the motorway roundabout.

“Watch out for the MTTD police who will take you through the detour routes which are newly constructed and asphalted and marked to let you negotiate the roundabout with ease.”

Meanwhile, the Ghana Police Service says it will deploy a minimum of 20 officers to ensure law and order on the alternative routes to help ease the pressure around the roundabout.

ASP Paul Bruce Amoah, Second in Command at the Tema Regional MTTD said adequate preparations have been made in that regard.

The project is financed at a cost of $57 million by the Japanese government through the Japanese International Cooperation Agency (JICA), to address the perennial traffic congestion within the enclave.