Leave my businesses, reputation out of your politics – Woyome 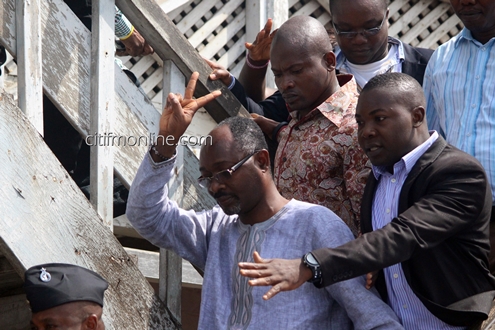 Businessman Alfred Woyome, has suggested that there is a political agenda against him following claims by a deputy Attorney General, Godfred Dame that he tried to hide some of his assets in an attempt to avoid paying back his GHc 51 million judgement debt.

According to Mr Woyome, known to be a financier of the National Democratic Congress (NDC), there is a deliberate attempt by political opponents to tarnish his hard-earned reputation.

“My dignity should also be respected. [They should stop making claims] until a final judgement is made. There have been judgements and I have won everything. Even at the Supreme Court, I won my case. What has been done to my reputation is too much. I am not part of their politics in Ghana.”

“I am a businessman, I want to help remove poverty from the streets; I have done that and will continue doing it. Nobody should touch my business and nobody should continue touching my reputation.”

Godfred Dame had stated earlier on Eyewitness News that there appeared to be some collusion between the now-defunct UT Bank and Mr Woyome to hide his assets from the state.

“The state was able to come across about four properties in prime areas owned by Alfred Woyome. Rather unfortunately, UT Bank laid claim to the properties and said it had bought them from Mr. Woyome. So the court in July ordered UT Bank to file their papers in substantiation of their claims. Lo and behold the papers that were filed by UT Bank even supported the case of collusion between UT Bank and Alfred Woyome to deprive the state of  a recourse to the properties to sell and realise the judgement debt.”

However, an audibly-agitated Mr Woyome did not take kindly to these claims and called into the show to accuse the deputy AG of “spewing lies.”

He described the persistent pursuit of his assets by the state despite the ongoing court case and constant accusations against him by state officials as a deliberate political witchhunt.

“I am not part of their political practice, neither am I contesting for political office so they should all go and hang somewhere and let’s go to the court, let’s hear it from the court.

“They should remove this matter from the political domain because it was not politics. I went to court, what is wrong with that? If a court gives me a good judgement and the judgement was implemented by a court order, does that constitute stealing Ghana’s money? Politicians should just stop this. They’ve failed the nation big time and the teeming youth.”

The Woyome story so far

The businessman sued the state for a breach of contract relating to the construction and was awarded the default judgement because the state did not put in a defence.