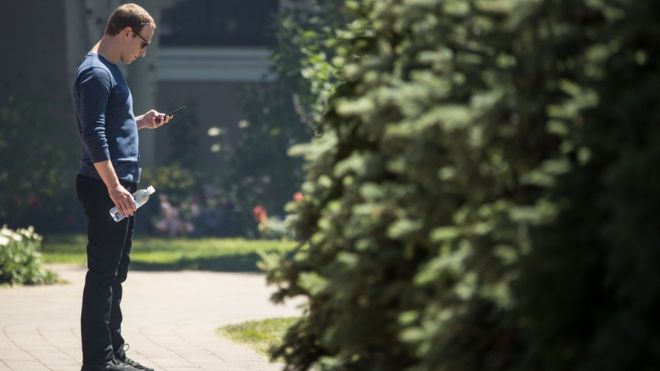 Mark Zuckerberg is both chief executive and chairman of Facebook. In the wake of a damning New York Times report, he is facing renewed questions on whether he should relinquish at least one of those roles.

The Times’ report, which it said was based on interviews with more than 50 insiders, is extraordinary. Mr Zuckerberg is notable by his absence at times of major decision-making at the firm he founded as a college kid.

On the topic of whether Donald Trump, in calling for a ban on Muslims entering the US, had broken Facebook’s policies: “Mr Zuckerberg did not participate in the debate.”

On the issue of sharing data about to what extent the firm should share details of Russian meddling with the public, Mr Zuckerberg “did not participate in the conversations”.

And Alex Stamos, the firm’s now-departed head of security, is said to have been “alarmed” at Mr Zuckerberg’s lack of awareness of fake news. As Mr Zuckerberg brushed off the concern as a “crazy idea”, Mr Stamos knew very differently – but was reportedly later scolded for investigating without permission from his superiors.

(The company has now said in a blog post that it had never stopped Mr Stamos from looking into the issue. He asserted the same in a tweet.)

The revelations made for shocking reading – not least to Mr Zuckerberg, who repeatedly told journalists on Thursday that the first he had heard about most of these issues was by reading about it on Wednesday.

Mr Zuckerberg, who has spent the past two years filling his staff with Washington DC political veterans (and more recently, in Nick Clegg, European ones), said he was surprised to learn that his firm had employed underhand tactics to smear activists, put pressure on political opponents, and criticise rival firms.

That kind of behaviour “might be normal in Washington,” Mr Zuckerberg said, “but it’s not something I want Facebook to be associated with”. In 2017 Facebook spent $11.5m, and hired 11 lobbying firms, to push the company’s interests in Washington.

Such efforts are now typical of Silicon Valley giants – Google spent $18m in the same period. But it was the actions of one firm, Definers, that took things a step further.

Mr Zuckerberg did not know, he said, that Definers was, on behalf of Facebook, allegedly pushing a narrative to journalists that an anti-Facebook campaign group, known as Freedom from Facebook, was secretly funded by George Soros. If you’ve ever been unfortunate enough to peer into the internet’s dirty basement, you’ll know conspiracies about Mr Soros, mostly with anti-Semitic undertones, are commonplace.

Mr Soros, as it turns out, is apparently not the wealthy backer behind Freedom from Facebook. His foundation denies it, calling the whole affair “reprehensible”.

According to Axios, the money is actually coming from David Magerman, a philanthropist and former hedge fund manager from Pennsylvania. He said he wanted to inform the public “about the risks of engaging with Facebook”.

‘Someone on the communications team’

All this leaves us in a place where Mr Zuckerberg, who has repeatedly reassured us he is working hard to stop fake news, may have actually been responsible for funding some of it.

Facebook denied ever asking Definers “to pay for, or write, articles on Facebook’s behalf – or to spread misinformation”. But the Times report draws a direct line between the PR firm and pro-Facebook articles appearing on the NTK Network, a “news” site with which it has direct ties.

During Thursday’s call with journalists, Mr Zuckerberg admitted he did not know the key details. He said he did not know what Definers’ activities were, or who at Facebook authorised that work. Probably “someone on the communications team,” he offered.

In answer to several questions – mostly along the lines of “how did you let this happen?” – he seemed to believe his ignorance was a defence, rather than an embarrassment.

“I learned about this relationship when I read The New York Times piece,” he repeated. “As soon as I read it, I looked into whether this is the type of firm that we want to be working with, and we stopped working with them.”

It’s apparent that Mr Zuckerberg’s team is keeping him out of the loop, or he’s choosing to remove himself from it. Either way, it isn’t entirely clear who is truly in charge at Facebook at this critical time for the company.

When asked if he considered stepping down as chairman of Facebook’s board, he said: “I don’t particularly think that that specific proposal is the right way to go.”

The decision would be his and his alone. Thanks to the firm’s stock structure, he has absolute control over the company and its board.