Only PhD holders to teach in universities – Education Minister 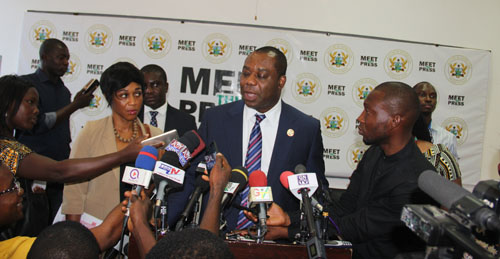 The Minister of Education, Dr Mathew Opoku Prempeh has announced that from now, only PhD holders will be allowed to lecture in a university.

“Now if you do not hold a PhD, you will not be able to teach in a university,” the Education Minister said.

But most of the lecturers in our colleges of education do not hold PhD. So we are giving them time to improve their knowledge, through the British government support” he added.

[contextly_sidebar id=”O9YR6p1D78q6wQld0umFAtqkf2NCcihl”]Speaking at the meet the press series in Accra Tuesday, he explained further that the move was to enable the universities to develop the capacity of teachers in the colleges of education.

Dr Prempeh explained that every capacity improvement was to the benefit of the Ghanaian schoolchild to improve the learning outcomes.

He cited for instance that in Finland, even at the Kindergarten level, it was teachers with PhD while in Ghana it was diploma holders, describing it as unacceptable.

Dr Prempeh explained that, it was as a result of it that government had decided that all teacher trainees would be degree holders.

He explained that even though producing graduates would have an implication on the government budget, “government is more interested in the learning outcomes and not the budget.”

He said each of the three would be a school that would be awarding their own degrees, explaining that the idea was long mooted by the previous government and that it was not anything new.

Dr Prempeh explained that each of the three wanted to stand as autonomous university, but that was not accepted, explaining that it was to ensure that resources were maximized.

He said after initial protest from the teacher trainees against the directive that they were to go through national service under the National Service Secretariat (NSS) so far 16,000 of them had registered with the secretariat to do the service.

“I met with the coalition of newly trained teachers and the Teacher trainee association of Ghana and they went and met with the GES and finally signed a memorandum of understanding (MoU) to do the national service,” he explained.

He insisted that the ministry was not seeking to discriminate against teacher trainees, insisting that he rather made it easier for them to do the service to cover the one-year probation, one-year induction.

Justifying the licensure examination, Dr Prempeh enumerated various professions such as the lawyers, nurses and doctors which had their own regulatory bodies that decided what made someone a member.

He, therefore, stated that those who were teacher trainees could decide not to take up teaching as a profession and for that matter would not write the licensure examination, stressing that “as long as you want to be professional teacher, then you have to be assessed by the regulatory body, which is the National Teaching Council (NTC)”.

From asset management to facilities management; a look at the 2019 budget [Article]