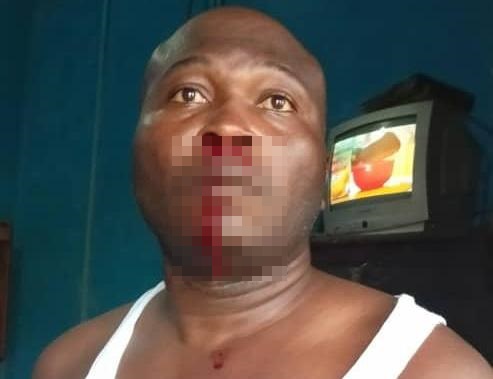 According to the Wassa Akropong Police, the incident which occurred last Friday left to a deep-cut on the nose of the station officer.

Police say the incident occurred when Nana Amoah Bediako, also known as Nana Kwasi Kumi parked his vehicle at an unauthorized place in front of the Police charge office.

The Station Officer, Inspector Tetteh Agbanyo then told him to move the car and park at a right place to enable others to have easy access to the charge office but the chief got offended and allegedly slapped the station officer.

According to the Wassa Akropong Police, Nana Amoah Bediako allegedly held the neck of the Station Officer, tore his uniform, and destroyed his name tag and badge.

When other Police officers made an attempt to arrest him, they were prevented by another Police Officer, Deputy Inspector Alex Donkor, a native of the area and stationed at Wassa Akropong together with one civilian, Alex Gyetuah.

The two allegedly aided the escape of the chief.

They were said to have punched the station officer on the nose which made him bleed profusely.

The Western Regional Police Command Public Relations Officer, Olivia Adiku who confirmed the incident to Citi News, said the suspect has since been arrested and sent to the Divisional Police Headquarters for an investigation into charges of assault to a public officer, causing unlawful damage to police accoutrements as well as the threat of harm to proceed.