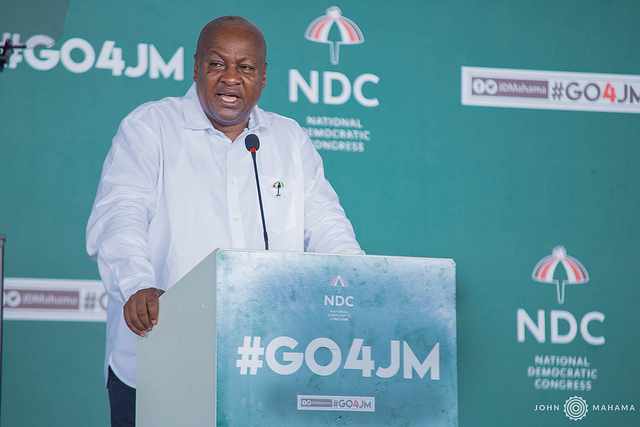 The presidential candidate of the opposition National Democratic Congress (NDC), John Dramani Mahama has warned the governing New Patriotic Party (NPP) to be mindful of its action against their party’s  National Chairman, Samuel Ofosu Ampofo.

Mr. Mahama said the deliberate attempt by the NPP to aggressively intimidate Mr. Amopfo will not in any way win the party the next election.

Speaking during his coastal tour, the former President said the NPP was setting a very bad precedent because the investigations that warranted Mr. Ampofo’s questioning were borne out of government’s frustration over the failure to properly manage the economy.

“No amount of harassment of our National Chairman will save the NPP from defeat. Indeed it is a sign of desperation that the Chairman of our party is constantly being harassed by the police authorities. But let them remember that in whatever they do, they are setting precedent. You cannot take any frivolous and vexatious investigation and be inviting the Chairman of the biggest opposition party every day to the CID headquarters on very useless allegations,” he said.

“We are advising the NPP – if you deliver on your promises, the people of Ghana will look favourably at you but if you have failed don’t out of your desperation decide to harass our party officials. Whatever you do, you cannot escape the judgment of the people”, he added.

NDC Chair, Samuel Ofosu Ampofo has in the past months been invited to the Criminal Investigations Department (CID) to assist with police inquiry.

Mr. Ampofo was first invited by the CID  for allegedly condoning political violence and urging threats against the lives of some personalities including the Chairperson of the Electoral Commission in a leaked audio.

The latest has to do with his alleged involvement in recent kidnappings and fire incidents in the country.

According to the CID, Mr. Ampofo has been identified as being part of a grand scheme to cause fear and panic in the country.

We’ll be truthful to Ghanaians

Meanwhile, John Mahama indicated that the NDC will be candid with its promises to electorates.

He further urged supporters not to relent in their efforts for victory in the 2020 polls.

“NDC will always be honest to you. We will tell you what we can do for you. When we come into government, we will do what exactly we said we can do for you. Let us all work hard and make sure that we go from corner to corner because I know in my heart that the 2020 election,  NDC is going to win back into power.”