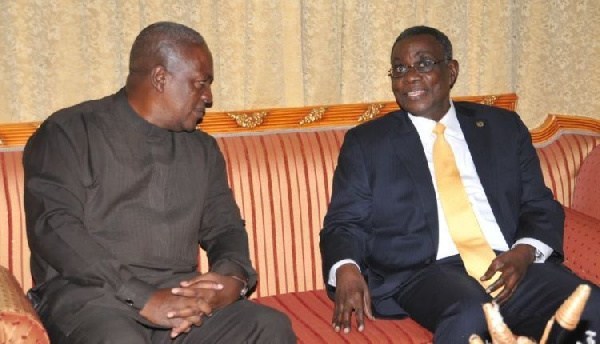 Former President John Mahama is paying glowing tribute to the memory of his former boss, President John Evans Fiifi Attah-Mills who died while serving as president in 2012.

Mahama, who was then the Vice President, in a Facebook post today [Wednesday], seven years on, extolled Professor Mills for his high leadership ideals.

He wrote: “Seven years ago, today, our nation was struck with unquenchable grief and agony when President John Atta Mills departed to his maker. He was a man who stood for the highest ideals of leadership and for the greatest aspirations of our democracy. RIP Prof.”

The National Democratic Congress (NDC), the party on whose ticket Prof. Mills stood through his political career until his death is holding a wreath-laying ceremony today at the Asomdwe Park, where he was buried, to mark seven years of his death.

The event, according to a Deputy General Secretary of the NDC, Peter Boamah Otukunor, has necessitated the postponement of the vetting of the party’s parliamentary aspirants which was to begin today.

“The event is to mark the 7th anniversary of the departure of our leader and former president Mills. Because of this ceremony, we will reschedule the vetting to start on Thursday 25th and Friday 26th, so today the vetting process will not come on across the country. We are dedicating this day to mark the memory of our former leader.”