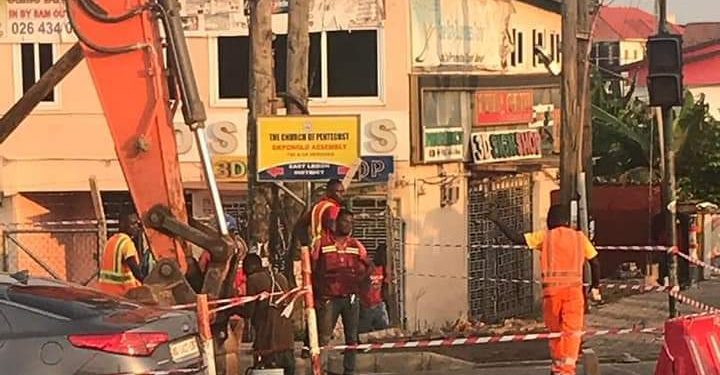 The section of the Legon Okponglo road that has been rendered unmotorable has been temporarily closed down for repair works.

According to the Ministry of Roads and Highways, the caving in of the road was as a result of a burst pipe underneath the stretch.

In a statement, the Ministry said the route will be closed from 10 pm tonight [Tuesday] for engineers to fix and replace the faulty pipe and also for the road to be resurfaced.

“The Ministry wishes to inform the general public that Engineers from the Department of Urban Roads have assessed the situation this morning and based on their assessment, that section of the road will be closed tonight, from 10 pm for works to begin on it. ”

“The works will involve, first and foremost, the replacement of the pipe to allow residents to have access to potable water. Afterwards, the existing materials in the ground will be removed and replaced. Finally, the ground will be compacted before scaling. The whole process will take about a week”, portions of the statement further added.

The Ministry is also warning pedestrians and road users to be careful when using the stretch, adding that it will do all it can to make the road motorable within the shortest possible time.

“We entreat all road users to be cautious when approaching that section of the road and follow all road measures.  The Ministry wishes to assure the general public that, all efforts are being put in place to improve the conditions of roads to ensure the safety and convenience of the road-user. “

The development was said to have affected traffic on the stretch on Tuesday.

It also forced the closure of a section of the road from Okponglo towards East Legon.

Some volunteers also directed traffic on the road to minimize congestion on that stretch due to the development.

Sinkholes, unlike potholes on Ghana’s roads, are not a common occurrence.

According to residents of the area, they suspect the incident is as a result of a burst pipe beneath the surface the road which had to flow freely for the past few days.

How close are we to making Accra the cleanest city in Africa?