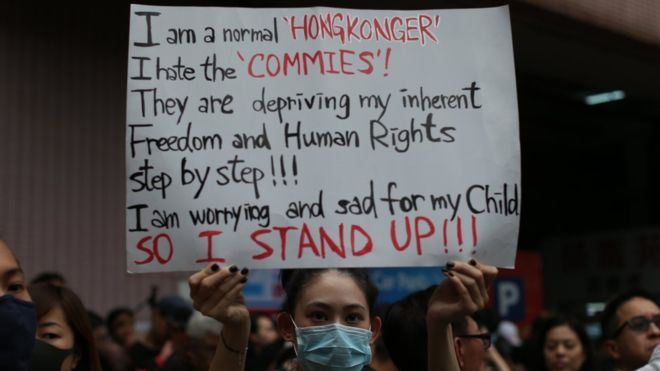 Protesters have gathered in Hong Kong for the ninth weekend in a row amid mounting tensions with the authorities.

Groups rallied in the Mong Kok district before starting their march, with some donning protective clothing.

Opposition groups plan further demonstrations on Sunday, and a city-wide strike on Monday.

Beijing and the Chinese army have issued stern warnings about the growing unrest.

Two months of demonstrations sparked by a controversial extradition bill show no signs of abating, with both sides hardening their stance.

Mass protests began in March over the bill which would have allowed extraditions to mainland China.

Although the government has now suspended it, demonstrators want the bill fully withdrawn, and are widening their demands.

Hong Kong – a former British colony – is part of China but enjoys unique freedoms not seen on the mainland.

Police had initially denied permission for the gathering but relented after an appeal.

Demonstrators reportedly walked past a designated end point for their march, chanting slogans and calling on people to join the planned strike on Monday.

Some unions and organisations have reportedly already agreed to take part in the action.

Volunteers handing out masks, hard hats, bottled water and pre-paid subway tickets to marchers. Many businesses along the route closed their doors.

A group of demonstrators blocked access to the Cross Harbour Tunnel, causing traffic chaos. Others set up make-shift barricades on shopping streets.

Saturday’s march comes after a group of civil servants – ordered to be politically neutral – joined demonstrations in their thousands on Friday.

The rally followed the publication of an anonymous letter on Facebook complaining about “extreme oppression” and listing five key demands – the complete withdrawal of the extradition bill; waiving charges against those arrested; an end to descriptions of protests as “rioting”; an independent inquiry into the unrest; and resuming political reforms.

“I think the government should respond to the demands, instead of pushing the police to the frontline as a shield,” 26-year-old government worker Kathy Yip told Reuters news agency.

Supporters of Hong Kong’s police force have also gathered for a rally on Saturday in Victoria Park.

How have tensions risen this week?

They could face up to 10 years behind bars if convicted.

Tensions rose further when the military – which has not yet intervened in the unrest – posted a video on social media network Weibo showing soldiers conducting anti-riot drills.

Chen Daoxing, commander of the territory’s People’s Liberation Army (PLA) garrison, said the protests “should not be tolerated”, according to reports in the South China Morning Post, a Hong Kong newspaper.

I’ve been raped before – Juliet Ibrahim

I’ve been raped before – Juliet Ibrahim