Over a hundred drivers and occupants of the Obra Spot lorry station protested today [Thursday] at the Kwame Nkrumah Interchange in Accra over their eviction from the property after its sale to an unknown private developer.

According to reports, some soldiers were at the station from 1 am to move all drivers and vehicles on the property.

Some of the drivers claimed the said land had been purchased by former Black Stars captain, Asamoah Gyan, although this has not yet been ascertained.

Speaking to Citi News, the Chairman of the station, Vincent Kofi Kpodo stated that they have been occupying the land for over thirty years and don’t know where to relocate to since ‘there is no work in the system’.

“We have been here for over thirty years now. The Gbese Mantse and other authorities gave us the go-ahead to operate here after government used a portion of it.  But three days ago, one Dr. Botwe from National Security came here to tell us that this land has been sold to a new developer. So, he was giving us only three days to vacate the land,” he said.

“At 1 am yesterday, some soldiers also from 38 Engineers Regiment came to move all our vehicles. Where do they want the over 500 workers here to go since they have no place to go and there is no work in the system?,” he added.

But the manager of Asamoah Gyan, Mr. Anim Addo has denied ownership of the property.

“I am not surprised that this is coming out now. Asamoah Gyan has not bought that land, we have not met anybody and we have not negotiated with anyone. We have not had any meeting with anybody regarding that land,” he said.

Meanwhile, the Deputy Accra Regional Commander of Police, Fred Adu Amin said investigations are ongoing to ascertain those behind the exercise.

“Information  reaching me is that, some soldiers came in this morning with an excavator to construct a wall. This is depriving the people occupying the land of their possession. We are yet to find out the details. So, far we haven’t seen those claiming to own the land so we are still making enquiries to locate them and ask questions because this is one side of the whole situation,” he said. 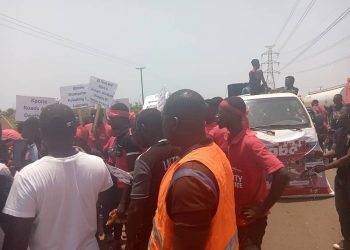 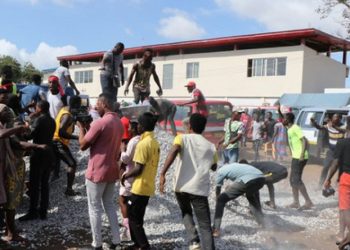