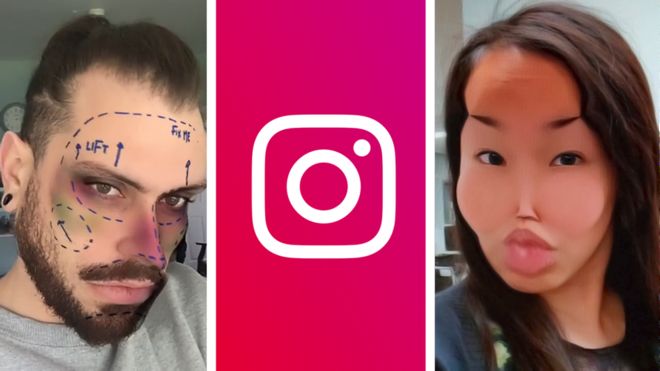 Effects that make people look like they have had lip injections, fillers or a facelift will be among those banned.

“We’re re-evaluating our policies – we want our filters to be a positive experience for people,” a spokesman said.

“While we’re re-evaluating our policies, we will remove all effects from the [effects] gallery associated with plastic surgery, stop further approval of new effects like this and remove current effects if they’re reported to us.”

In August, an update to the Instagram app allowed users to create their own virtual effects, such as animations and custom face filters, that can be superimposed on images and videos.

Many popular filters – such as Plastica – mimicked the effects of extreme cosmetic surgery.

Another filter – FixMe – showed how a cosmetic surgeon marked a person’s face before procedures.

Its creator, Daniel Mooney, told the BBC: “FixMe was only ever supposed to be a critique of plastic surgery, showing how unglamorous the process is with the markings and bruising.

“My intention was not to show a ‘perfect’ image, as you can see in the final result. Perfection is over-rated.

“I can see where Instagram is coming from, but for as long as some of the most-followed accounts on Instagram are of heavily surgically ‘improved’ people, removing surgery filters won’t really change that much.”

Instagram said it was unsure how long it would take to remove all of the filters but many users welcomed the ban.

“Most people just pass filters off as ‘girls having fun’ and to just let girls enjoy things – but when you haven’t posted a photo without one of these filters since 2016, then it clearly is something deeper than just ‘fun’,” one user said on Twitter.

However, some users said they would miss the effects.

“Has Instagram also considered me and what I’m supposed to do when I’m having a day where I look more clapped than normal? Old haggard witches need to look stunning too,” tweeted one.

Research suggests excessive use of social media can cause feelings of depression – although some dispute those claims.

In February, Instagram said it would remove all graphic images of self-harm from the platform, amid concerns they could affect young and vulnerable people.

It followed the death of 14-year-old Molly Russell, who killed herself in 2017 after viewing graphic images of self-harm on the site.

The Danquah versus Nkrumah ‘un-reconciled’ feud; A Ghana problem [Opinion]