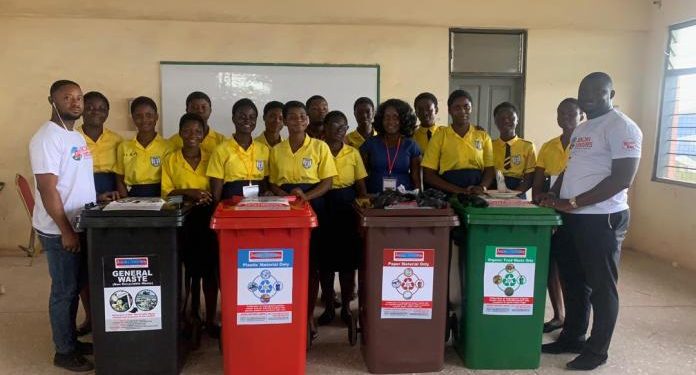 The donation by the company was to commend the school for emerging winner of this year’s 7th edition of Planet Broadway Drama Festival competition organised by the Heritage Africa.

The donation, the General Manager in-charge of Segregation and Innovations Department of Jekora Ventures Limited, Mr Emmanuel Chainortey noted was also in fulfilment of the company’s promises to help the school to segregate waste materials to supplement President Nana Addo Dankwa Akufo-Addo’s commitment of making Ghana the cleanest country.

He said, in the pursuit of that agenda, Jekora Ventures Limited had designed a comprehensive strategy to tackle the sanitation issues in the country by way of donating refuse bins to various schools including MEGHISS for effective waste segregation to promote good sanitation in the country.

Mr Chainortey noted that this year’s theme for the competition was “The Benefits of Sanitation on National Development,” and that having been the waste segregation company, “we are very happy when the organisers of the event, Heritage Africa approached us to sponsor the event.”

He stated that “So we are here to redeem our promise to donate the bins to the MEGHISS,” saying the donation of the bins to schools is the mode the company was championing for the long times in the country.

According to him, the bins would help the school to segregate waste to reduce waste drastically in the school.

“We believe that the waste which will be segregated by the students from the MEGHISS would be sent to the waste recycling companies which would reduce the waste generation drastically in the premises of the school.”

He called on teachers to help mould the character of the children in the school and sensitise them on the need to support good sanitation by using the litter bins to segregate waste.

For her part, the Headmistress of MEGHISS, Mrs Sylvia lsabella Laryea thanked the management of Jekora Ventures Limited for the refuse bins and promised to use them for the purposes to which they were donated.

It would be recalled that the MEGHISS on November 16, 2019, held its 35th anniversary and 5th speech and prize-giving day at Wesley Hall at Mamfe Akuapem.

The event which is on the theme ” holistic education in retrospect and the way forward,” was graced by the hierarchy of the Methodist Church Ghana, former students of the chiefs and government officials.