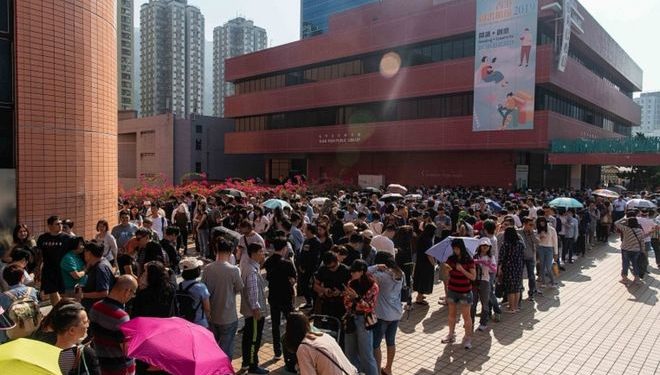 Voters have turned out in record numbers to cast their ballots in Hong Kong’s district council elections.

By lunchtime, the number of voters had already surpassed the final total in the 2015 elections.

The election is seen as a test of support for Hong Kong’s embattled Chief Executive Carrie Lam.

Pro-democracy protest groups hope the vote will send a message to the Chinese government after five months of unrest and anti-government protests.

Long queues formed on Sunday amid fears polls might be closed by authorities if violence disrupted the election.

In the run-up to the election, pro-democracy protest groups had urged people not to cause disruption. No trouble has been reported so far.

A record 4.1 million people have registered to vote – more than half the population of 7.4 million.

More than 400 councillors are due to be elected to Hong Kong’s district council.

Pro-democracy campaigners hope they will be able to increase their representation on the council, which traditionally has some influence in choosing the city’s chief executive.

Pro-Beijing candidates are urging voters to support them in order to express frustration at the upheaval caused by continuous clashes between protesters and police.

More than 1,000 candidates are running for 452 district council seats which, for the first time, are all being contested. A further 27 seats are allocated to representatives of rural districts.

Currently, pro-Beijing parties hold the majority of these seats.

Police were seen outside some polling stations and on the streets but correspondents said they kept a low profile.

“Facing the extremely challenging situation, I am pleased to say… we have a relatively calm and peaceful environment for (the) election today,” Carrie Lam said after voting.

Counting will start immediately after polls close at 22:30. Results are expected to start coming in before midnight.

Queues formed early at Taikoo Shing in beautiful sunny weather, and by the time voting began they snaked around the block. The picture was similar at other polling stations. Local issues were on the minds of some voters, but the importance of this election as a clear test of support for the government and its opponents was lost on very few.

Some voters were uneasy about expressing any opinions in front of others. The sight of Democratic Party candidate Andrew Chiu sitting outside, chatting to reporters, and showing the bandaged left side of his head where an assailant bit off part of his ear earlier this month, offered a grim reminder of how far Hong Kong’s crisis has divided communities and families.

Nonetheless, some told us they treasured this opportunity to send a message with their ballots, a free vote with a wide choice of candidates they said they were all too aware is not available in other parts of China.

Ten out of thirty-five seats in this district were uncontested at the last local council election, where pro-government parties have long enjoyed the advantage of better funding. This time every seat is being contested.

The opposition pan-democratic alliance has adopted the five demands of the protest movement as its slogan and hopes public sentiment over the five-month crisis will give it an opportunity to take control of many of the district councils for the first time.

Why are these elections important?

District councils themselves have very little actual power, so usually, these elections take place on a very local level.

But this election is different.

They’re the first elections since anti-government protests started in June, so they will act as a litmus test, reflecting how much support there is for the current government.

“People in Hong Kong have begun to see this election as an additional way to articulate and express their views on the state of Hong Kong in general and the government of Carrie Lam,” Kenneth Chan, associate professor at Hong Kong Baptist University, told news agency Reuters.

Then there’s the issue of Hong Kong’s chief executive.

Under Hong Kong’s electoral system, 117 of the district councillors will also sit on the 1200-member committee that votes for the chief executive.

So a pro-democracy district win could translate eventually to a bigger share, and say, in who becomes the city’s next leader.

There are some notable names running in the elections.

Pro-Beijing lawmaker Junius Ho – one of the most controversial politicians in the city – is among them.

Mr Ho was stabbed earlier this month by a man pretending to be a supporter.

The lawmaker has openly voiced his support for Hong Kong’s police force on multiple occasions. He was in July filmed shaking hands with a group of men – suspected of being triad gangsters – who later assaulted pro-democracy protesters.

Jimmy Sham, a political activist who has recently risen to prominence as the leader of the Civil Human Rights Front – a campaign group responsible for organising some of the mass protest marches – is running for the first time.

Mr Sham has also been attacked twice, once apparently with hammers. Photographs showed him lying on the street covered in blood.

Who isn’t running is also notable. Pro-democracy activist Joshua Wong was barred from running in the elections, a move he referred to as “political screening”.

Some Assembly Members in Accra back ‘NO vote’ in December Referendum