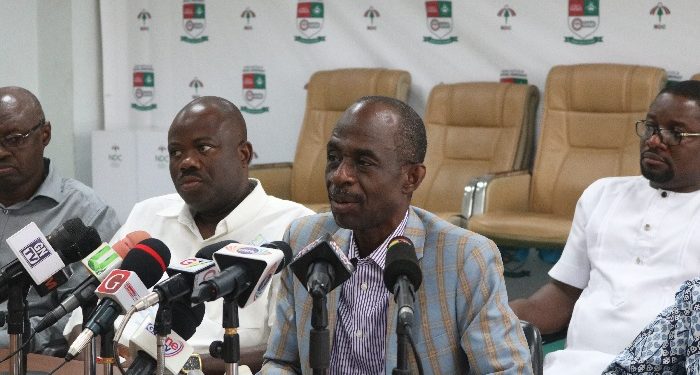 The opposition National Democratic Congress (NDC) has described as hypocritical, the excuse given by President Nana Akufo-Addo for the cancellation of the December 17 national referendum.

The party is strongly convinced that, the cancellation was politically motivated and not as a result of the seeming lack of broad consensus as the President claimed.

A statement signed by the General Secretary of the NDC, Johnson Asiedu Nketia, said Nana Akufo-Addo’s failed parochial attempt to introduce partisan politics at the local government level compelled him to find a convenient excuse and call off the controversial referendum.

“The NDC finds the reason given by the President as basis for his decision to call off the Referendum as contrived and self-serving. The justification of a lack of ‘broad national consensus is a only convenient excuse calculated to save President Akufo-Addo from public ridicule relative to the abortive amendment of Article 55(3).”

According to the NDC, although the suspension gives credence to arguments raised by the proponents of the ‘NO Vote’, the President’s decision was however arrived at over fears that, he would be ridiculed should the outcome of the referendum not go in his favour.

“The NDC views the cancellation of the December 17th Referendum as a refreshing victory for the party and the broad coalition of NO campaigners who rallied to oppose the intended partisan politicization of Ghana’s local government system. Our collective patriotic decision to put Ghana first and preserve the sanctity of the non-partisan local government system of Ghana has paid off.”

Portions of the statement also noted that:

“We wish to state without any equivocation that the real reason for the decision by President Akufo Addo to cancel the December 17th Referendum was nothing but his fear of imminent defeat for a YES Vote had the referendum come off. His fear of the embarrassment that defeat would have caused him and his government is what compelled and informed his decision and nothing more. The cancellation was therefore motivated by the selfish political interest of President Akufo-Addo and not the lack on any broad national consensus as he would want Ghanaians believe.”

The December 17 national referendum was meant to decide on an amendment of Article 55 (3) of the Constitution to enable political parties to sponsor candidates during local level elections.

But the absence of “a durable national consensus” on the matter following consultations compelled President Akufo-Addo to cancel the referendum.

The opposition National Democratic Congress (NDC) started advocating for a NO vote few weeks to the referendum saying an amendment to Article 55 (3) will open district assemblies and unit committees to “the needless NDC-NPP polarisation.”

Akufo-Addo unhappy with NDC over ‘U-turn’ on referendum

President Nana Akufo-Addo is disappointed in the opposition National Democratic Congress (NDC) for campaigning for a NO vote prior to the cancellation of the national referendum.

Information Minister, Kojo Oppong Nkrumah who disclosed that he spoke to the President personally after calling off the referendum explained that President Nana Akufo-Addo is not upset but rather pained with regards to the outcome of the referendum.

“It is not [the referendum] being suspended, withdrawn or aborted that the President is upset about. I spoke with the President personally. He is pained that we had a brilliant opportunity after 25 years to do this now, but we hit a snag. He is hopeful that as we move along and engage and explain it a bit more we get that consensus back we can still reach that objective in a short period of time,” he said.

Nana Addo had no choice – NPP laments cancellation of referendum

The New Patriotic Party (NPP) says it is saddened by the cancellation of the December 17 referendum by President Nana Akufo-Addo.

At a press conference on Monday, addressed by its General Secretary, John Boadu, the NPP said the President was given “no choice” in the matter.

“We are however encouraged by the assurance last night that the President and the government are not giving up on this important search for a consensus for as long as the New Patriotic Party remains in office.”