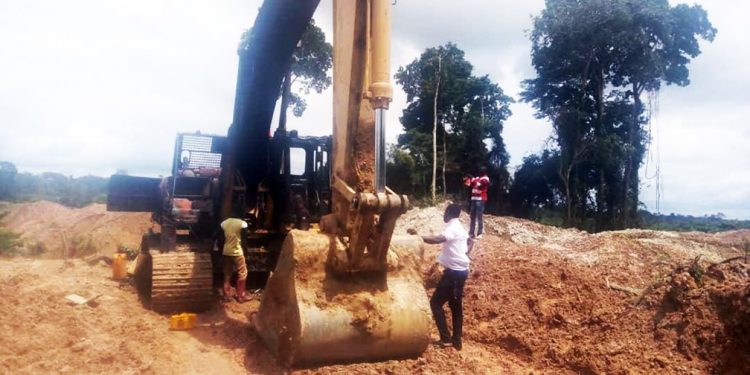 The Member of Parliament (MP) for Abura Asebu Kwamankese in the Central Region has denied purchasing one of the excavators said to have gone missing.

Media reports indicated that the MP purchased one of the excavators at the cost of GH₵200,000 from the Chairman of the Inter-Ministerial Committee on Illegal Mining Professor Kwabena Frimpong-Boateng in 2017, through the suspended NPP Central Regional Vice Chairman, Horace Ekow Ewusi.

However, speaking to Citi News on the matter, the Abura Asebu Kwamankese MP, Elvis Morris Donkoh described the report as untrue.

Furthermore, in a statement sighted by Citi News, Mr. Donkoh said he believes the accusation is a “calculated attempt aimed at damaging my reputation in the minds of right-thinking members of my constituents”.

My attention has been drawn to a statement which has been circulated widely in the media landscape with the above caption purporting to be coming from my good self and the office I occupy.

This I believe is a calculated agenda aimed at damaging my reputation in the minds of right-thinking members of my constituents.

I find this intriguing and cruelty from my naysayers who are nothing short of doomsday pretenders and sentimental charlatans.

Well-meaning Ghanaians should treat such statement with the greatest of contempt it deserves as no agenda occasioned against me will subject me to public ridicule.

The statement I see further as malicious and could be best described as false misrepresentation of facts and the office I occupy as it is aimed at ridiculing the harmonious relationship I have with officers and members of the party.

The circulated statement is not only FAKE but poor in logical reasoning, factually empty and consistently inaccurate.

The Volta Regional branch of the opposition National Democratic Congress (NDC) has demanded the interdiction of Prof. Kwabena Frimpong-Boateng, Minister of Environment, Science, Technology and Innovation and John Peter Amewu, former Minister of Lands and Natural Resources over the current development in the mining sector.

“We are saddened by the unfolding drama of thievery surrounding the missing 500 excavators seized during the much-trumpeted galamsey operations dubbed Operation Vanguard. We demand the immediate interdiction of Prof. Frimpong-Boateng and John Peter Amewu, Ministers for Environment, Science and Technology and Energy and Petroleum and others mentioned in this shameful scandal,” the Volta Regional branch of NDC demanded in a statement signed by its Regional Secretary, James Gunu.