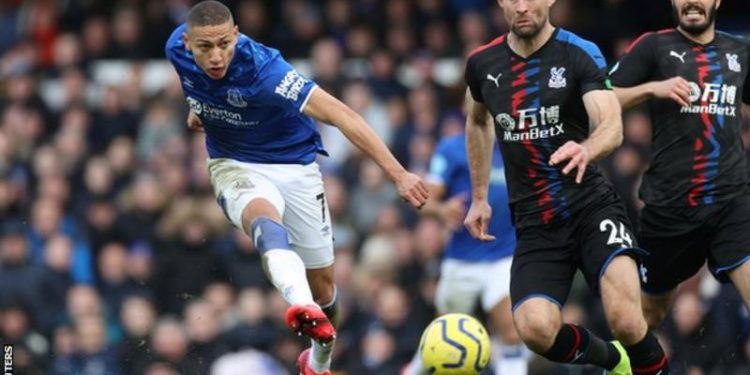 Everton stretched their unbeaten run to five games as a 3-1 victory over out-of-form Crystal Palace moved them up to seventh in the Premier League.

The hosts dominated the first half and deservedly took the lead when Bernard volleyed in Theo Walcott’s superb cross.

But Palace, without a win so far in 2020, fought back after the break and equalised when Christian Benteke’s low strike went under keeper Jordan Pickford.

Everton then had to withstand a spell of pressure from the rejuvenated visitors but restored their lead when Richarlison ran through the Palace defence and slotted into the bottom corner.

Pickford saved superbly from Benteke’s close-range header to protect the Toffees’ lead, before Dominic Calvert-Lewin sealed victory when he prodded in after Richarlison’s header had hit the crossbar.

The win leaves Everton just one point behind fifth-place Tottenham Hotspur, who have a game in hand.

Crystal Palace remain six points above the relegation zone in 14th place, but all of those below Roy Hodgson’s side now have a game in hand.

It is only two months since Everton slipped into the relegation places and looked destined for a tough battle against the drop this season, but the Toffees – first under caretaker manager Duncan Ferguson and now Carlo Ancelotti – have turned things around significantly.

An unbeaten start to the year, including wins over Brighton and Watford, has propelled them up the table and the improved form and quality of football under Ancelotti means many fans are now hoping for a top-six finish.

They started confidently against Palace on Saturday and the away side could not cope with them for the first 15 minutes. When Bernard struck with a superb volley it was a lead the hosts fully deserved.

The creator of that goal was Walcott, who had been a constant menace down the flank leading up to his assist – but when the forward pulled up with an ankle injury shortly afterwards and had to be substituted, Everton lost their way.

However, with Richarlison in their ranks Everton always have that bit of quality to muster something from nothing, and so it proved as he took on the Palace defence by himself to restore his side’s lead.

It was an open game from then on but it was the hosts who got the crucial next goal to kill off Palace’s hopes of a point.

Everton’s next four matches include trips to Arsenal and Chelsea and home games against Manchester United and Liverpool – so this could prove to be a vital three points for Ancelotti’s team.