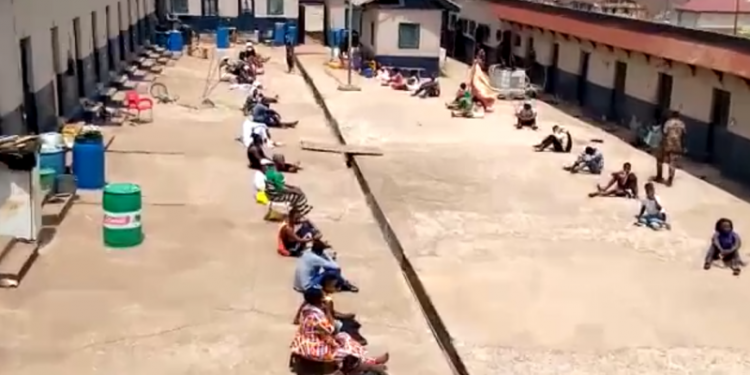 Persons arrested at the wedding ceremony

A circuit court in Obuasi has remanded 40 persons for defying the ban on social gatherings amidst the outbreak of the novel coronavirus in Ghana.

Police say a total of 46 persons were arrested on Saturday, 11th April 2020 while holding a wedding ceremony at Akaporiso in the Obuasi East District of the Ashanti Region.

According to the police, six persons were granted bail after investigations revealed they were not part of the gathering.

The 40 persons including the groom and bride who were arraigned on Thursday have been charged with defying the Imposition of Restrictions Act and will reappear before the court on May 6, 2020.

The officer in charge of prosecution at the Obuasi Divisional Police Command, ASP Kwabena Oduro Boateng told Citi News that “We arrested more than 40 people who were celebrating a marriage ceremony at Obuasi. They were taken to court today and have been remanded to reappear before the Obuasi Circuit Court on the 6th of next month. We arrested about 46 but 40 were taken to court. This was because after the investigation, it was revealed that the six people were not part of the people who committed the offence. They were charged with violating the Restrictions Act. They all pleaded not guilty to the offence.”

The persons that were picked up during the ceremony included the groom, Philip Ahenekwa, aged 35, and the bride, Ama Frema, aged 40.

The Obuasi Municipal Police Commander, DSP Martin Asenso, told the media that some of the guests managed to evade arrest.

In a similar incident, a couple and over 25 guests out of 50 were arrested by the Greater Accra Regional Police Command during their wedding ceremony in Darkuman over the weekend.

Some 406 persons have so far been arrested for violating the partial lockdown directive and the ban on public gatherings.

This was disclosed by ACP Lydia Donkor, Head of Legal and Prosecution at Accra Regional Police Command of the Ghana Police Service on Tuesday, April 14, 2020, at a press briefing organised by the Ministry of Information.