Residents around Weija dam worried over possible spillage due to cracks 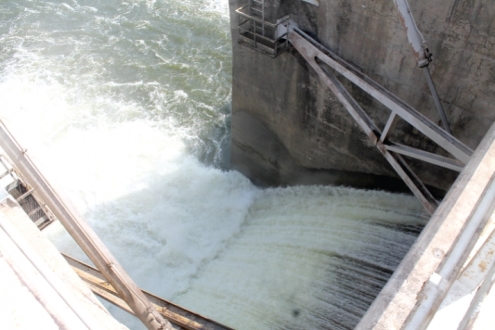 There is growing anxiety amongst residents of Weija and its immediate environs over a potential water spillage due to cracks on some portions of the dam.

With the onset of the rainy season, residents fear that if the situation is not immediately addressed, they may lose their properties to floodwaters.

Displacement and loss of properties due to the spillage of the dam have been perennial problems residents within the catchment area have been faced with.

They are thus calling for a permanent solution to the problem.

A resident, Nii Boye Adama told newsmen, “the rains are coming and we can’t endure any flood. I’ve stayed here for close to 10 years and every year I go through this problem. It will be worse with the COVID-19 now spreading when we encounter another flood.”

“We know the President is a listening father and we are appealing to him to do something about the Weija Dam else catastrophe awaits the nation,” he added.

Another resident who spoke on condition of anonymity said the situation as has persisted for many years.

The resident said some children cross floodwaters before reaching school while some schools are unable to use some of their classroom blocks during the spillage of the dam.

“We have a lot of issues but the flooding is the issue. Now we hear there are cracks all over the dam and this is terrible. Do they want us to die? Anytime they spill the dam, everything comes to a standstill in this part of the capital. Are we not part of Ghana. Our children have to virtually swim before they get to school or schools don’t open at all. It’s not easy, the Ghana Water Company Limited and the government must hear our cry this year.”

A student, Isabella Gyan also lamented that the situation has led to the loss of many lives and urged managers of the dam to address the problem.

“Every year, this is what we go through. Last year my little sister nearly lost her life when the flood came. A friend was also nearly electrocuted when he stepped into the water with an electric wire in it. Our lives are in danger. We are appealing to our MP and officials to save us this time because we can’t fight flood and coronavirus at the same time,” he said.

In 2019, it was reported that the dam had developed structural cracks that needed attention.

The 1978-built dam serves about 80% of households in Accra water.

According to some of the residents, they fear that, if the Weija Dam is left to deteriorate further, the facility structure will soon collapse, swamping hundreds of homes and carrying away incalculable lives and property.

In 2016, a number of communities in the catchment area of the Weija Dam in the Ga South Municipality were submerged, following the spillage of the dam by the GWCL.