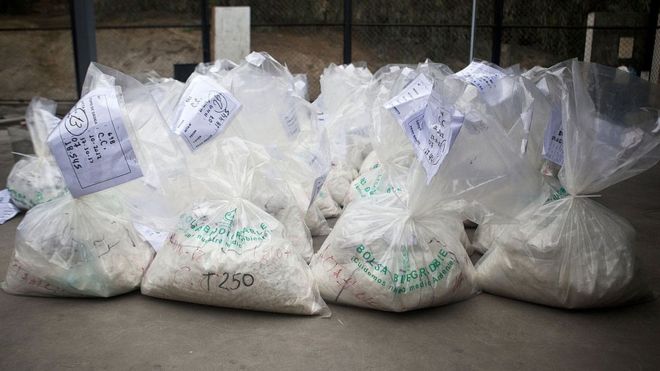 The Sector Commander of the Ghana Revenue Authority (GRA) Customs Division, Majeed Amandi is of the view that the 100.10 grams of suspected cocaine that mysteriously went missing may have been stolen by officials of the Narcotics Control Commission (NACOC) or swept away.

The substance was intercepted through the collaborative effort of the Customs Division of the GRA and NACOC during a joint search on a Toyota Land Cruiser Prado vehicle with a Nigerian registration number, LSR 815 FV at the Kpoglu Border Post in the Ketu South Municipality of the Volta Region.

The Director-General of NACOC, Francis Torkornoo had said his officers after impounding the vehicle that had concealed the substances under its fuel tank on Friday, June 2020, took inventory of all the packages, which included $200,000 and wanted to send it to Accra for investigations but Customs officers refused.

“When they dropped the fuel tank, there was this false compartment under the vehicle containing various parcels and an amount of $200,000. After the inventory, as expected, NACOC wanted to the bring the vehicle to Accra for investigations to start, but the Customs officers refused, saying that they need to hear from their superiors from Accra,” he said.

Mr Amandi, however, dismissed this explanation in a statement, intimating that, it was intended to downplay the Custom officers’ handling of the intercepted substance.

“It is my humble conclusion that there was a well-orchestrated plan intended to discredit the handling of intercepted narcotics by Customs. And further that NACOC officers have harboured a clear vendetta against Customs for numerous times that Customs have intercepted narcotic substances.”

“In view of the small size of the particular parcel concerned, i.e 100g whitish substance, it is my observation also that possibly the parcel could have dropped in the midst of the disorderliness of examination process at the conference room and was swept away together with the rubbish unnoticed or even pilfered by any of the NACOC officers who handled the substances during examination for their diabolical intentions.”

He expressed his dissatisfaction with attempts by NACOC to sabotage Customs officers.

“From the attitude of the NACOC officers before, during and after a physical examination of the intercepted cargo, it was clear also that, the sabotage of our operations cannot be ruled out. And also that misinformation, as well as a deliberate attempt to incriminate officers at the least opportunity, may not be ruled out.”

This is not the first time a substance suspected to be cocaine has mysteriously gone missing.

A similar incident happened on September 27, 2011, when one Nana Ama Martins was arrested for possessing large parcels suspected to be cocaine which later turned into bicarbonate or baking soda.

The case, which was widely known as the “Cocaine turn baking soda” scandal, led to the interdiction and subsequent dismissal of DSP Gifty Tehoda who was linked to the disappearance.

After years of legal battle, the court declared DSP Tehoda not guilty on March 31, 2017.

She was subsequently reinstated after a Human Rights Court ordered the Police Service and Inspector General of Police, David Asante Appeatu to recall her.