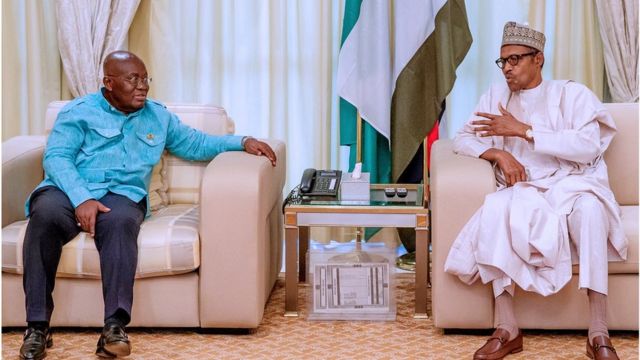 An international relations analyst, Dr. Yaw Gebeh has called on the Economic Community of West African States to intervene in the current trade impasse between Ghana and Nigeria.

The Government of Nigeria had claimed that its citizens in Ghana have over time endured a series of “progressive acts of hostility” allegedly meted out them by Ghanaian authorities.

The Government of Nigeria further warned that it will no longer tolerate such actions against its citizens residing in Ghana.

She further argued that just as Nigeria closed its borders to fight smuggling of goods even though the decisions affected other ECOWAS states, so was the situation of the government of Ghana.

Mrs Ayorkor Botchwey also debunked claims that the decision to close down the shops was politically motivated.

Diplomatic relations between Ghana and Nigeria appears to be taking a nosedive as governments of both countries take steps to protect the interest of their citizens.

Speaking on Eyewitness News, Dr Yaw Gebeh called on ECOWAS to quickly intervene to resolve the matter and to avoid such occurrences between other member states in the future.

“I don’t think we have to raise emotions when these issues come to the fore. We must rather sit down and talk unless we are saying that we do not really believe in what we are doing as a community and that the regional structures are just mere symbolism. Mind you, whatever regional integration processes that we have put in place, there comes a time when we talk of supra nationalism meaning the institutions themselves must be allowed to work and so, in this case, it won’t just be a country called Ghana or a country called Nigeria. So at this point, we are making reference to the commission to resolve the dilemma so we don’t make it a Ghana and Nigeria issue so that the whole community can benefit from it,” he added.