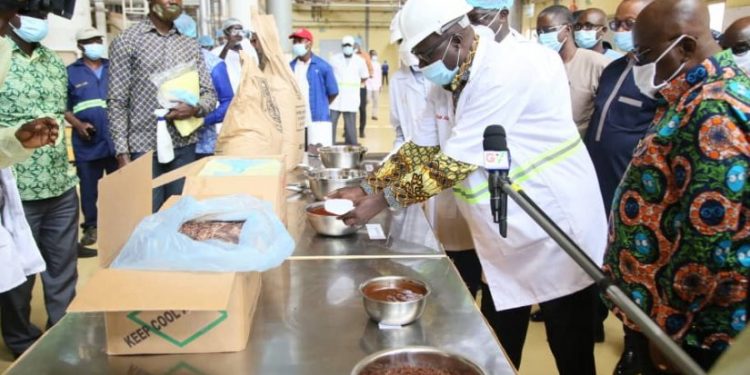 The President, Nana Addo Dankwa Akufo-Addo says government will support the Cocoa Processing Company (CPC) to turn its losses and debts into profitability.

He said the company was strategic to the government’s push for value-added industrialization of the country and would be given the necessary assistance to boost its viability.

The President gave the assurance on Wednesday, August 26, 2020, when he visited the processing facility of the CPC at the Tema light Industrial Area to acquaint himself with the workings and challenges of the company post-COVID.

He said his visit to the company was to reinforce the fact that there was a need to support the country’s strategic economic institutions whose performance would be a major indicator of how well Ghana would fare in the future.

Noting the debilitating effect of the COVID-19 on the global economy, the President said there was the need to systematically open up the economy again.

“Within the meantime, a lot has happened and it is important that we draw a balance sheet of what is happening so that we can position ourselves to look as to what we need to do for the future,” he stressed.

President Akufo-Addo said his administration was committed to transforming Ghana’s economy from one reliant on its raw materials to one driven by value-added exports.

This, he said, would accelerate the country’s industrialisation agenda, enhanced agro-productivity, place Ghana at the high-end of the global market place and create jobs for Ghanaians.

With Cocoa being a mainstay of Ghana’s economy for over a century and a principal source of funds for its development, there was a need to promote the activities of the CPC to contribute effectively to the Agenda of a Value-added export-driven economy.

He said the operations of the CPC reinforced his conviction that the company was at the cutting-edge of Ghana’s industrialization success, because of its strategic importance in the economic landscape of the nation.

“So, to have this company whose aim it is to add value to our cocoa industry makes you a very strategic company in our economic landscape,” he said.

The President said the company, like many such state-run entities, had not been well managed, leading to “formidable challenges and indebtedness running into over 100 million dollars”.

He said he was encouraged that the new management appointed by his administration was putting in the needed efforts and initiatives to “confront the past and build a successful and viable future for the company.”

“The CPC story is one that should be widely told as a source of inspiration for many people in the private sector,” he said.

The President further indicated that the increase in the subscription to Ghanaian confectionery and chocolates was a major boost for cocoa production and processing for Ghana.

He argued that between Ghana and Ivory Coast, both nations produced between 65 percent of the world’s cocoa beans, but earned a meagre 10 billion dollars per annum out of a global annual industry value of about 142 billion dollars.

That, he said, ought to change, adding that Ghana would collaborate with Côte d’Ivoire to increase its share value in the global market chain.