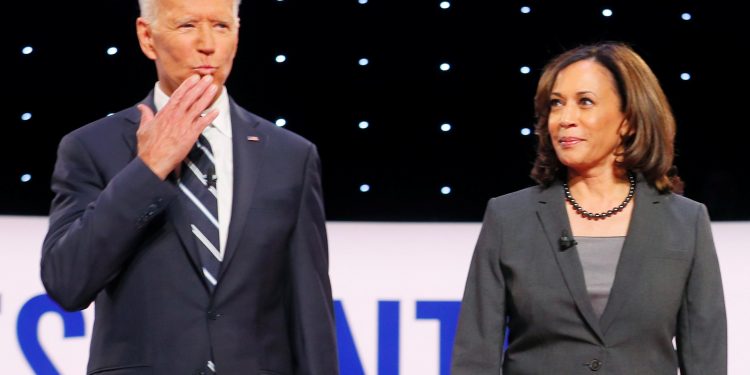 “I’ve decided that Kamala Harris is the best person to help me take this fight to Donald Trump and Mike Pence and then to lead this nation starting in January 2021,” the presumptive Democratic presidential nominee wrote in an email Tuesday.
In selecting Harris, Biden adds a former primary rival who centred her own presidential bid on her readiness to take on Donald Trump and show Americans she would fight for them. She rose to national prominence within the Democratic Party by interrogating Trump nominees during Senate hearings, from former Attorney General Jeff Sessions to Supreme Court Justice Brett Kavanaugh.
Harris’ selection comes months after Biden committed to picking a woman to join him on the Democratic ticket. Harris, 55, is now the third woman to serve as a vice-presidential candidate for a major political party, following Geraldine Ferraro as the Democratic vice-presidential pick in 1984 and Sarah Palin as the Republican vice-presidential pick in 2008.
Aware that his age could be a concern to some voters, Biden, 77, has said that he is “a bridge” to a new slate of Democratic leaders, and by selecting Harris, more than 20 years his junior, he has elevated a leading figure from a younger generation within the party.
Biden’s selection unfolded with the utmost secrecy after a period in which he spoke with the contenders either in person or in face-to-face meetings. He notified several close advisers on Tuesday, two people familiar with the matter told CNN. After considering some 11 women for the post, he and his aides spent time on Tuesday afternoon notifying the VP candidates who he did not choose.
California Rep. Karen Bass, chairwoman of the Congressional Black Caucus, was told by Biden himself that she was not the pick, a source familiar tells CNN. Georgia Democrat Stacey Abrams was also informed Tuesday that she is not Biden’s vice presidential pick, a source familiar with the matter tells CNN.
As part of the selection process, the former vice president spoke directly to the final contenders, according to people familiar with the process, through either face-to-face meetings or remote conversations. Officials would not say which of the candidates visited Biden in person, but CNN confirmed last week that Michigan Gov. Gretchen Whitmer had flown to Delaware for a meeting.
California Sen. Kamala Harris and former Obama national security adviser Susan Rice are among the others seen as the most serious contenders.
CNN had previously reported that Biden was also believed to be considering Bass, Sen. Elizabeth Warren of Massachusetts and Sen. Tammy Duckworth of Illinois, people familiar with the search say.
In yet another sign that the pick was imminent, a Biden campaign official told CNN on Tuesday that they have assembled the staff for Biden’s future running mate.
Karine Jean-Pierre, who joined the Biden campaign as a senior adviser in May, will lead the running mate’s team as chief of staff. Jean-Pierre had previously worked for Barack Obama and Martin O’Malley’s presidential campaigns.
Two veterans of the Obama-Biden administration are also joining the team. Liz Allen, who served as deputy communications director for Biden as vice president as well as deputy communications director in the White House, is joining as communications director to the running mate. And Sheila Nix, who was chief of staff to Biden’s reelection campaign in 2012 and served as Jill Biden’s chief of staff in the White House, will be a senior adviser to the running mate and spouse. The vice presidential pick is expected to also add a few of her own advisers to the team.
Source: CNN
Tags: Joe BidenKamala HarrisUS National elections
Previous Post