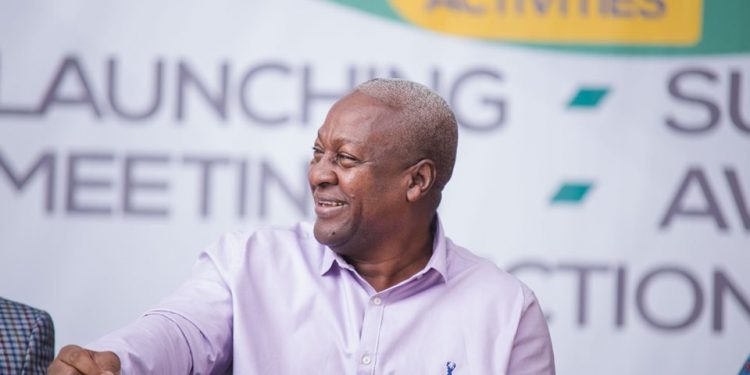 He says, should he be elected in the upcoming general election, the next NDC government will increase the allocation given to such persons under the District Assembly Common Fund (DACF).

The former President said this has become necessary following what he says is the reduction of the Disability Fund by the current New Patriotic Party (NPP) administration.

According to Mr. Mahama, the NPP had reduced the disability share of the DACF, from 7.5 to five percent.

During a courtesy call on the Wa Naa’s palace as part of his four-day tour of the Upper West Region, Mr. Mahama assured that “for our colleagues who are Persons With Disabilities (PWDs), we are going to increase the District Assembly Common Fund (DACF) share that is given to the disabled.”

He noted that when the party increases the DACF from five percent back to 7.5, the share that goes to disabled persons will also increase proportionality.

Mr. Mahama also identified improper disbursement of the Fund as one of the major problems worsening the plight of PWDs.

He blamed the situation on the failure of Metropolitan,  Municipal and District Chief Executives (MMDCEs) who do not prioritize the disbursement of the disability Fund.

To solve this, John Dramani Mahama disclosed that PWDs will be given the opportunity to form Boards of Trustees of their own to manage a special account for the disbursement.

“And so when we come, we are going to prioritize the disability Fund. We are going to create a Fund which will be separate from the DACF. When the DACF comes, the share of the disabled will be paid into a specialized account and they will have a Board of Trustees formed by the disabled persons themselves who will be responsible for disbursing that Fund.”

“50 percent of the fund will go as monthly stipends to disabled persons. The other 50 per cent of the Fund will be invested in programmes and projects that will benefit persons with disability but they will determine how they want to use their money,” he added.