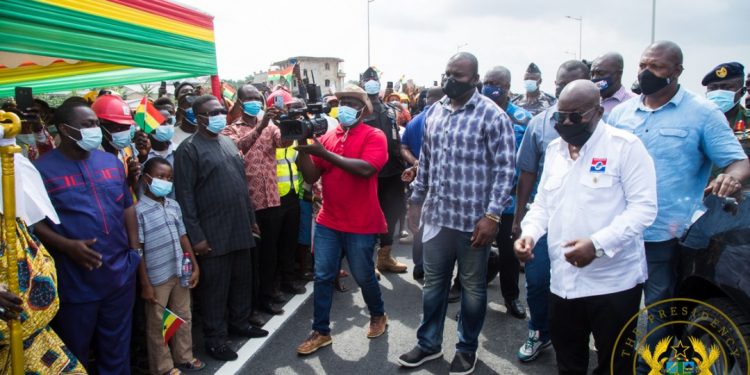 President Nana Addo Dankwa Akufo-Addo, on Wednesday, 25th November 2020, commissioned phase one of the Pokuase interchange as part of his two-day tour of the Greater Accra Region.

It will be recalled that, with the project commencing in April 2018, and the interchange originally proposed as a 3-tier single-point urban interchange, the contractor, after undertaking a value engineering assessment, proposed to construct a four-tier stack interchange, which was approved by the Ministry for Roads and Highways.

President Akufo-Addo, at the ceremony, opened to traffic tier-three of the interchange, which is the road from Awoshie to Accra, as well as the road from Kumasi to Awoshie.

The project coordinator at the site told the President that other tiers of the Interchange will be opened for use by the public and motorists in the second week of December, adding that “at the end of March, we would have completed the entirety of the fourth tier”.

In addition to this, President Akufo-Addo was informed that some five kilometres of storm drains have been completed “to ensure we don’t have flooding in the downstream.” 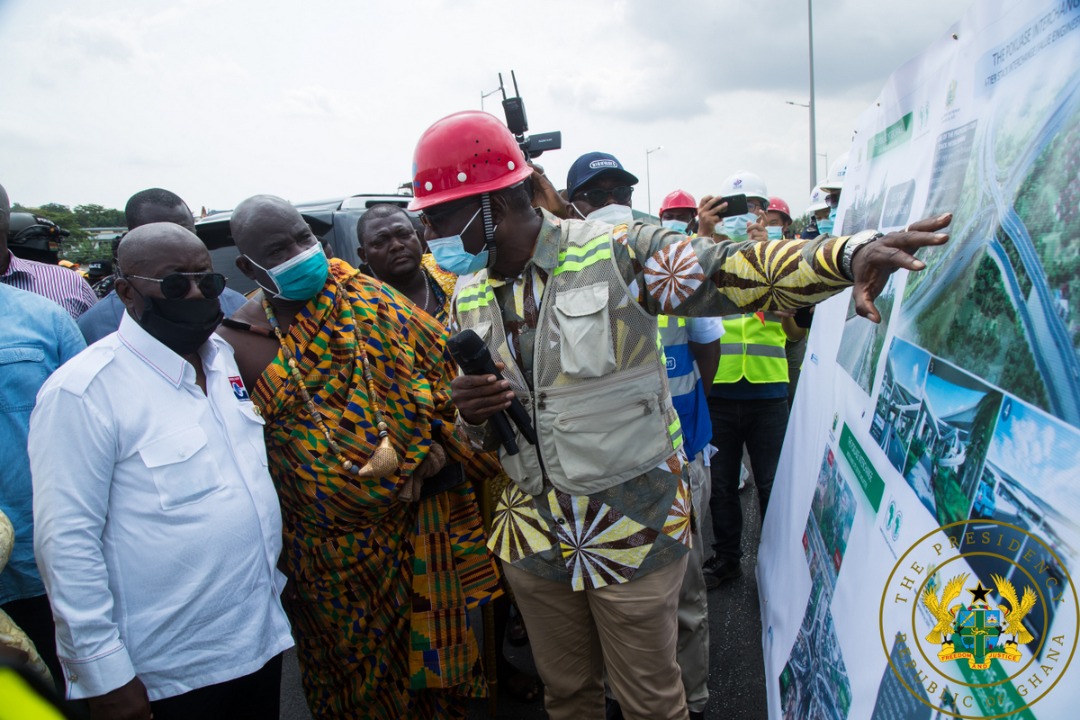 As at December 2019, when the President last visited the site of the Interchange, some extra routes which had become necessary after a review of the works were advanced and were completed before the end of 2019, with over 10 kilometres of local community roads being completed within the catchment area of the interchange.

The contractor, Zhongmei Engineering Group Ltd, at the time told the President that 4 kilometres of asphalt dual carriageway had been completed for the Awoshie section of the project, with landscaping, street lighting, road signs, pedestrian facilities underway. 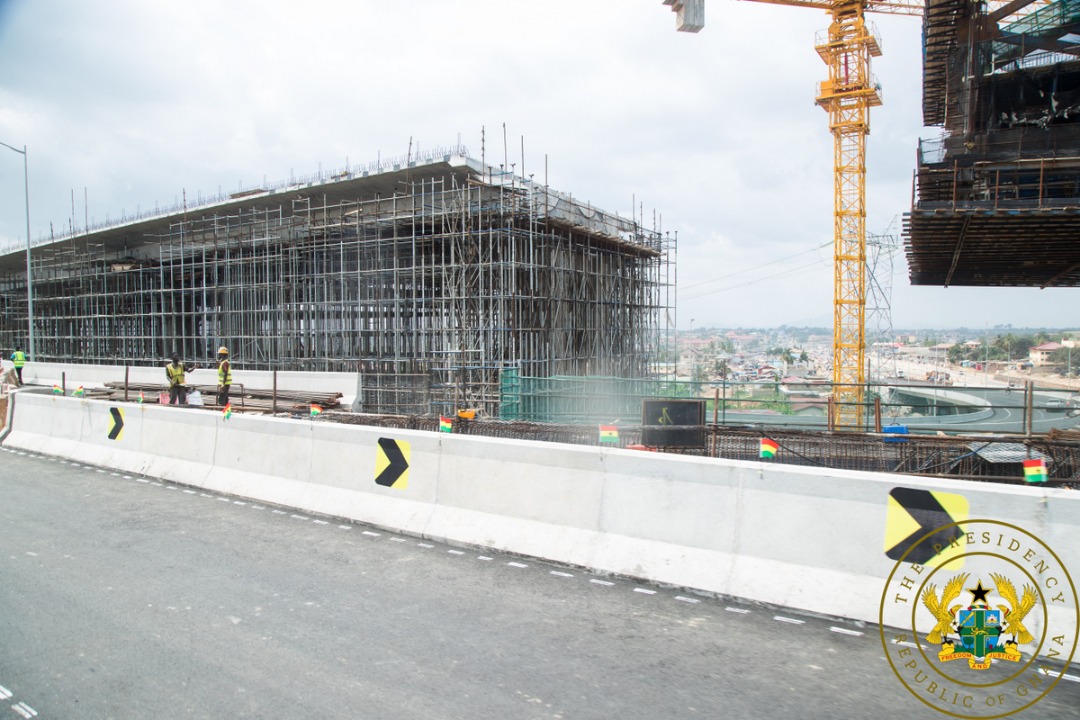 Also, one kilometre of asphalt single carriageway had been completed for the Kwabenya section of the project, with pedestrian facilities, and retaining wall constructions being undertaken.

The supervising engineer on-site also told President Akufo-Addo that drainage works, retaining walls, earthworks were being constructed on the Accra to Kumasi road approaches to the interchange, in addition to the 2.8 kilometres of various sizes of outfall storm drains constructed as part of the project to date.

Touching on the interchange itself, the engineer revealed that 99% of pile foundation works had been completed.

He noted also that GRIDCo’s 330kv transmission line had been relocated, and 98% of ECG’s network, which was impacted by the project, had also been relocated. 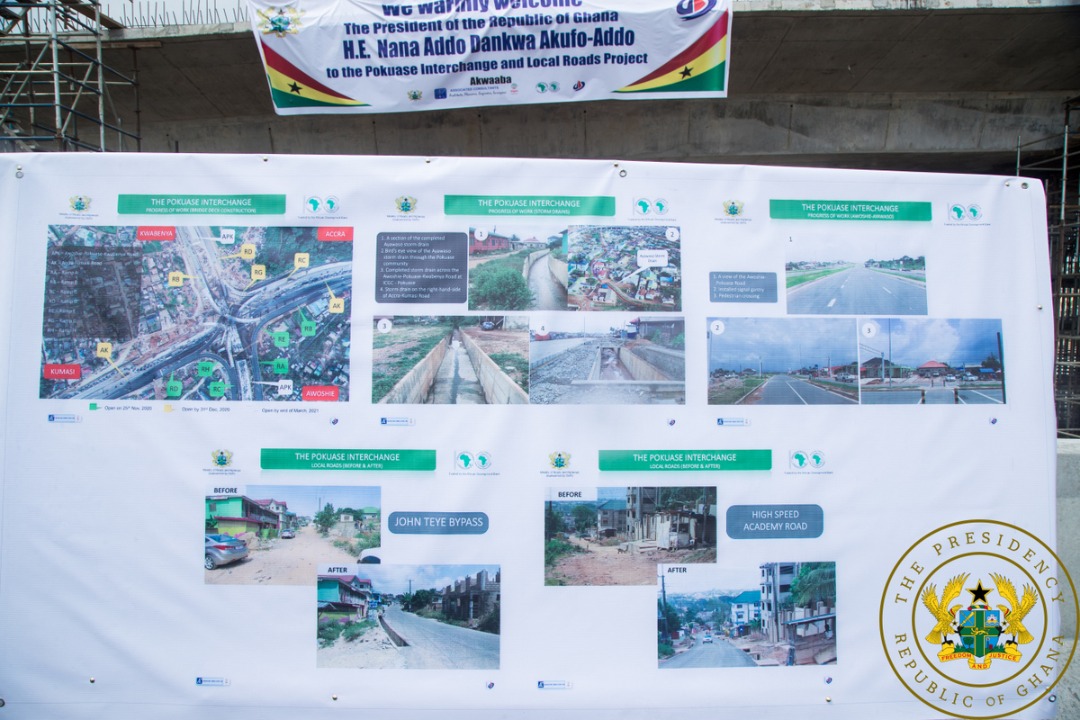