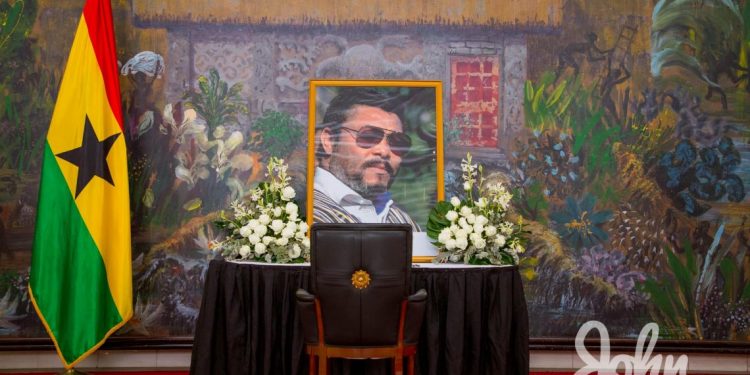 The National Democratic Congress (NDC) is eulogizing the memory of its founder, Jerry John Rawlings, urging its supporters to emulate his passion and commitment towards accountability in governance.

A number of party stalwarts including Chairman Ofosu Ampofo; Speaker of Parliament Alban Bagbin; Minority leader, Haruna Iddrisu and NDC General Secretary, Johnson Asiedu Nketiah all took their turn at a virtual symposium held by the party in Rawlings’ honour to pay glowing tributes to him.

They credited Rawlings for Ghana’s current stable democracy and urged Ghanaians especially supporters of the NDC to fight to protect the gains of the democracy which they believe former president Jerry John Rawlings largely contributed to.

The Speaker of Parliament, Alban Bagbin in his address said there were many things being said about Rawlings in recent times that were completely false and meant to tarnish his image.

He accused political opponents of trying to rewrite history to paint Rawlings black.

“The picture that people have been painting about him [Rawlings] is entirely not correct. He has a listening ear, he respects seniority, he respects authority, he respects positions, and he has an unending passion for intellectualism. He respects the elites a lot. For the 8 years that I worked closely with him, I studied him, and it is very easy to understand Jerry John Rawlings.”

“We were doing everything to bury our founding father who was alive just because history is being rewritten by some people who are our opponents,” Bagbin remarked.

He said he took very important lessons about leadership and governance from Rawlings.

The Minority Leader, Haruna Iddrisu, said Rawlings’ love for peace and building a stable democracy saw him among other things instituting a public holiday for the celebration of the Eid-ul Fitr and Eid-ul Adha.

“Let Jerry John Rawlings will be remembered for his contribution to religious tolerance and religious coexistence in Ghana by that singular act of making Eid-ul Adha and Eid-ul Fitr national days. He is fondly to be remembered for contributing to the democratic stability of Ghana, unparalleled in our country’s history.”

According to him, the many radio and television stations in Ghana are lasting legacies of the desire of Rawlings to allow freedom of expression as enshrined in the 1992 constitution.

“Ghana can boast of over 148 FM stations in the country, a number of television stations, over 48, that has contributed to giving meaning to freedom of expression. Those are found in the 1992 constitution which many described as chop bar constitution, but that constitution has lived longer than any other constitution of our Republic,” he said.

The General Secretary of the NDC, John Asiedu Nketia on his path, suggested that the current NPP government has taken Ghana back to the days of doom and gloom that prompted the overthrow of Ignatius Kutu Acheampong in the 1970s.

He said given the kind of things happening in the country at the moment, it appeared that what Rawlings lived and died for, was not worth it.

“These days look very much like the dying days of Kutu Acheampong and those were the days that projected President Rawlings unto the political scene, so if he is departing at the very point under the same circumstances he met, let us find out whether what he stood for was good or did he live and die for a just cause.”

He further urged all Ghanaians to ponder and take action on what to do to “save this democracy so that it can remain a lasting legacy to Rawlings’ memory.”

Meanwhile, a former Minister for Defense, Benajmin Kumbuor says the government must return to and embrace the philosophy of probity and accountability which Rawlings preached while alive.

He said there must be apolitical application of the law in order to protect the country’s democracy.

“We have come across very different meanings but at the time we say it is in distributive and retribute elements. This was expressed in our national tribunal system, and the investigative bodies to ensure that social justice was given a practical meaning… Probity and accountability have become a foreign language in contemporary times and sometimes a strange one. Probity and accountability are enforced against others and depending on which category you fall, it will be enforced against you,” he lamented.