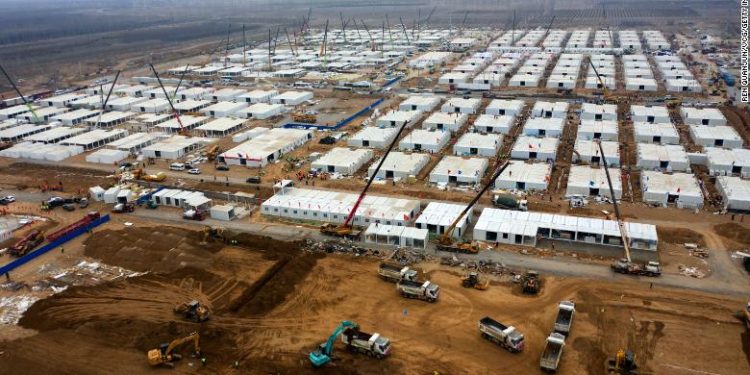 China is rushing to build a massive quarantine camp that can house more than 4,000 people, after an outbreak of Covid-19 this month that has left tens of millions of people under strict lockdown.

The quarantine camp is located on the outskirts of Shijiazhuang, the provincial capital of Hebei province, which surrounds the country’s capital, Beijing.
China has largely contained the spread of the virus, with much of the country returning to normal. However, a sudden rise in cases has alarmed officials and raised concerns ahead of the Lunar New Year, the county’s most important annual festival, during which hundreds of millions of people are expected to travel to visit family members.
Officials in Shijiazhuang, where the outbreak is centred, have initiated mass testing and strict lockdowns, moving entire villages into centralized quarantine facilities in a bid to curb the spread of the virus.
The new quarantine camp will house close contacts of confirmed Covid-19 patients, as authorities continue an extensive contact tracing and testing program.
It was originally planned to house 3,000 people but has since been expanded to a capacity of 4,160. More than 4,000 construction workers performed “six days’ and nights’ work” to complete the first phase, said Shijiazhuang Deputy Mayor Meng Xianghong on Tuesday.
Authorities began construction on January 13 and the first section of the camp is now complete and ready for use, while construction continues on the second phase, according to state-owned broadcaster CCTV.
Each prefabricated room is expected to measure 18 square meters (around 194 square feet), and will come with an en-suite bathroom and shower, desks, chairs, beds, Wi-Fi, and a television set, according to CCTV.
Source: CNN
Previous Post

EOCO nabs two doctors, nine others over the sale of babies