Domelevo’s allegiance was to Mahama not Ghana – Nana Addo 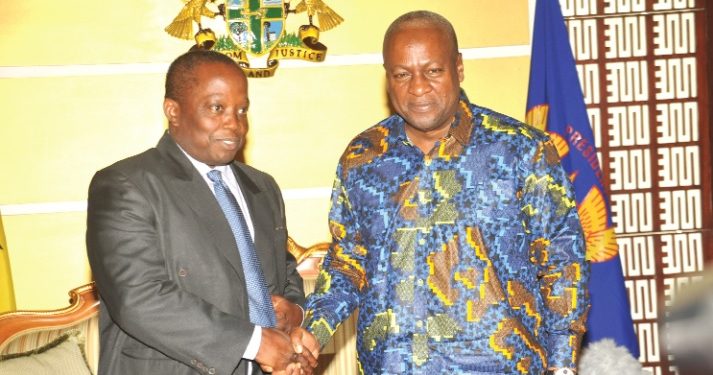 The President, Nana Addo Dankwa Akufo-Addo says there is enough cause to believe that immediate past Auditor General, Daniel Yao Domelevo owed allegiance to his appointer, ex-President John Dramani Mahama.

According to Akufo-Addo, this is evident in the manner through which Mr. Domelevo was appointed in 2016; insisting that the appointment had some elements of ulterior motive against him as incoming President.

In a 21-page document issued by the Office of the President to chronicle matters leading to what many deem to be the controversial retirement of the Auditor General, the President said John Mahama hurriedly selected Mr. Domelevo rather than one Dr. Felix Kwame Aveh because of his “painful loss” in the 2016 presidential election.

According to Akufo-Addo, Dr. Felix Kwame Aveh was the Auditor General that former President Mahama intended to appoint if he had won the election of December 7, 2016, but because that did not happen, he settled on Domelevo to “pursue an agenda”.

Making reference to the letter written by the then Chief of Staff, Julius Debrah to the Council of State, President Akufo-Addo mentioned that the change which the letter refers to as unforeseen circumstances was because of Mr. Mahama’s defeat.

“A reasonable and objective conclusion was that having lost his mandate to govern, former President Mahama appointed Mr Domelevo to the office, knowing very well that President Akufo-Addo would be sworn into office in a few days, to pursue a particular agenda”, portions of the release read.

President Akufo-Addo said despite these events, he was still committed to working with Mr. Domelevo as Auditor General.

Indeed, he acknowledged the fact that he invited Mr. Doemelevo in the presence of the current Minister of Energy, Dr. Matthew Opoku Prempeh and encouraged him to continue to be at post.

The President also cleared the air that “never had he held the view that the work of Mr. Domelevo was embarrassing his government”.

Although critics and Civil Society Organizations have said the President acted in bad faith, Nana Akufo-Addo said his decision has enough justification.

Bono East: No evidence yet to prove murder of Muslim cleric was politically motivated – Police

Bono East: No evidence yet to prove murder of Muslim cleric was politically motivated - Police