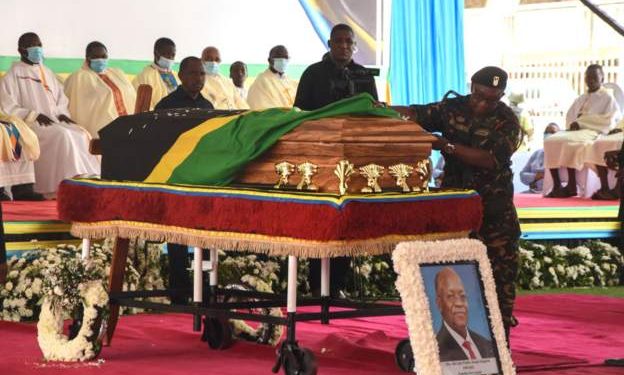 Tanzania’s former President John Magufuli will be buried on Friday in his home town Chato, in north-west Tanzania.

There was an official funeral in the capital, Dodoma, on Monday and since then his funeral cortege has been making its way through the country.

The 61-year-old president is said to have died of heart complications.

President Samia Suluhu Hassan, who succeeds him, will lead the nation during the burial ceremony.

She has tweeted a thank you note to “everyone who has supported comforted and sent us condolence messages during this difficult and trying times for our nation”.

Today as we lay to rest our beloved President Dr. John Pombe Joseph Magufuli; on behalf of the People of the United Republic of Tanzania and on my own behalf i would like to thank fellow Compatriots; National Leaders, Religious Leaders, Political Leaders, Diplomatic Community, pic.twitter.com/ZQjiZCd03W

Days ahead of the burial ceremony, police arrested four people for allegedly mocking the death of the former president.

The regional police head of the south-west region of Mbeya, Urlich Matei, said the suspects intended to “cause chaos and breach of peace”.

The country has suspended all public activities during the 21 days that have been set for mourning the president.