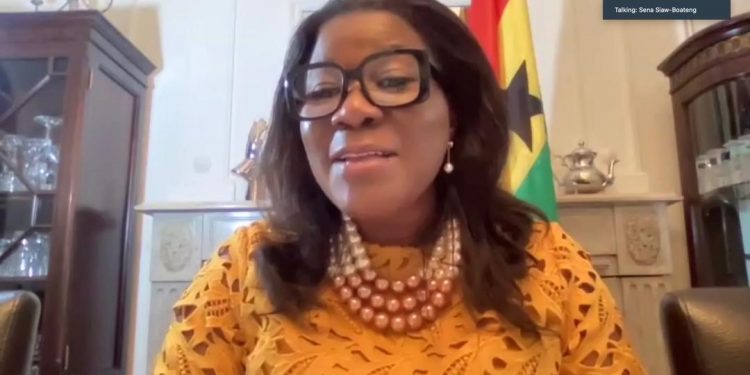 Her Excellency, Harriet Sena Siaw Boateng, Ghana’s Ambassador to Belgium and Permanent Representative to the European Union, has encouraged young Ghanaian women to cultivate the passion for International Affairs from an early age, if they desire to make strides in global institutions.

This, coupled with intellectual curiosity and excellent communication skills, would lay solid foundations upon which an international relations career would thrive, she noted.

Expanding further on her position, she explained that, a sense of curiosity at an early age provides the urge to learn, which is critical in providing young girls with the vital knowledge pool they would need for the rest of their international affairs careers. “You may have heard it said so often, that knowledge is power. This is so true, particularly in the field of International Affairs”, she said.

She noted that, critical thinking and objectivity are invaluable traits in a diplomatic career, and a large knowledge base, conditions the development of such traits.

“Unlike some other careers, international affairs, demands a lifetime of nurturing your talents and developing knowledge in the field, and this can only be possible, where passion and a love for the field, collide at an early age”, she said.

“ You would have to develop an eye for what happens around you. And because of the interconnectedness of our world, with time, you would discover the relevance of a seemingly unimportant domestic issue, in international affairs”, she added.

Pondering on some of the challenges she faced along the way, she disclosed that she has had to walk the “tight ropes” between family responsibilities and her career, as well as the need to work as thrice as hard as men, in order to prove her value.

“But though I have had to pass some opportunities along the line due to family commitments, my career has been largely fulfilling thus far, and this can be your story too”, she encouraged the audience.

She lauded the affirmative policies that are springing up in global institutions, including the AU, and urged young women to capitalise on them and excel through hard work, passion, and self-improvement.

“And while at it, don’t forget to seek out mentors who can direct your paths in this pursuit”, she concluded.

Ambassador Harriet Sena Siaw-Boateng, a product of Achimota School and Oxford University, is a career diplomat with decades of experience in diplomacy and international relations.

They shared their experiences in top professional roles, and encouraged the younger generation to be inspired by the achievements of successful women in order to seize the opportunities of their generation.

Harvest Praise 2021 comes off on April 2; will be live on Citi FM, Citi TV

Harvest Praise 2021 comes off on April 2; will be live on Citi FM, Citi TV