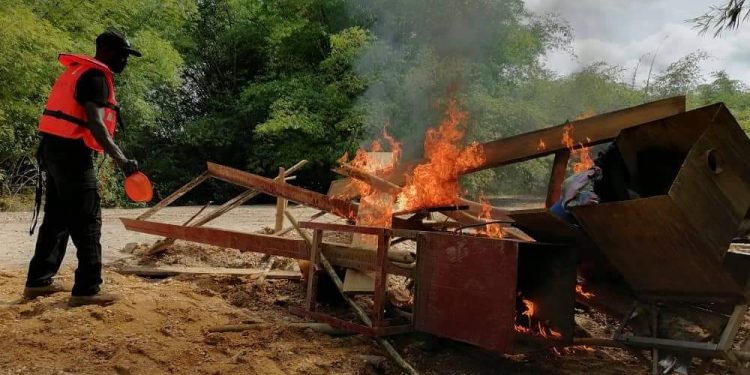 The 200 military personnel dispatched by the government to flush out illegal miners on Ghana’s water bodies have destroyed nine excavators,127 changfans, and one fuel pump.

The exercise christened “Operation Halt” has also led to the arrest of two Chinese nationals.

Outlining the scope of work of the team, the Minister of Defence, Dominic Nitiwul, warned that the armed military men will take action against persons who are found to have returned to the site.

“It is noted that since the operation commenced on Wednesday, April 28, 2021, to Thursday, April 29, 2021, the troops have destroyed a good deal of equipment including nine excavators and  127 changfans. Furthermore, the following items have been seized and would have been but for the fact that they will be used as exhibits in court for prosecution. The items include 8×24 plate batteries, one pump action gun case, a generator, a Huawei phone, a chainsaw machine, eight raincoats, fuel filters, non-citizen Ghana cards, two drilling equipment, and two boots.”

“These items will be destroyed except what the police deem necessary for their work for prosecution.”

He also noted that they will be patrolling and operating in galamsey-endemic regions, where major river bodies and forest reserves have been polluted.

“This operation will be conducted on all major river and forest reserves in all galamsey endemic regions throughout the country to rip them of illegal mining activities.”

“There will be aerial patrols at places where GAF has also swept past. Armed men would be authorised to take immediate action on anyone who returns to these river bodies to engage in galamsey activities.”

About the military deployment

According to the statement, the directive is based on the suggestions the government received during the Stakeholder Dialogue on Small Scale Mining which took place from April 14 to 15, 2021.

“In furtherance of the resolution of the final communiqué of the Stakeholder Dialogue on Small Scale Mining on April 14 to April 15, and to ensure that mining within water bodies is immediately stopped; the President of the Republic, Nana Addo Dankwa Akufo-Addo has authorized the Ghana Armed Forces to commence an operation to remove all persons and logistics involved in mining from Ghana’s water bodies.”

“The operation commenced at 0600 hours on Wednesday, April 28, 2021, on the River Pra in the Central and Western Regions of Ghana. Two Hundred (200) officers of the Ghana Armed Forces are involved in the operation.”