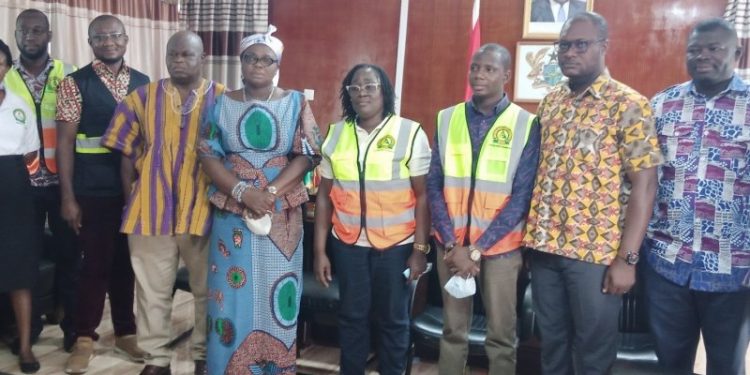 Mrs. Yeboah said this when she paid a courtesy call on Madam Justina Owusu-Banahene, the Bono Regional Minister, as part of her two-day inspection visit to the region.

She was accompanied by Mr. Kwame Koduah Atuahene, the Head of Regulations, Inspections and Complaints Department of the NRSA and key staff of the Authority.

Mrs. Yeboah told the Minister that there were over 1,000 motorcycle and tricycle crashes since January, and attributed the uncontrolled crashes to speeding and careless driving.

She said the Authority had forwarded a draft Legislative Instrument (LI) to the Attorney General for onward delivery to Parliament for consideration, explaining that the passage of the LI would push the implementation of the NRSA Act 2019, Act 993, which assigns a regulatory role to the Authority.

Mrs. Yeboah indicated that the government is much concerned about uncontrolled fatalities on the road, and as a result, President Nana Addo Dankwa Akufo-Addo has set up a Ministerial Committee to ensure that road safety regulations were implemented to the letter.

She said it requires decisive approaches to tackle road crashes, and thus appealed for support from stakeholders to prevent “needless” deaths on the road.

On her part, Madam Owusu-Banahane acknowledged the important role the NRSA plays and called on the Authority to intensify road safety education, and also ensure public education is also carried out in local languages.

She emphasised the enormous consequences of road accidents on the country and called for effective collaboration between road sector agencies, NRSA and other key stakeholders for intensified education and enforcement of road safety regulations.

Mr. Atuahene told the Ghana News Agency (GNA) that the visit was aimed at building institutional support for the new regulatory mandate of the Authority.