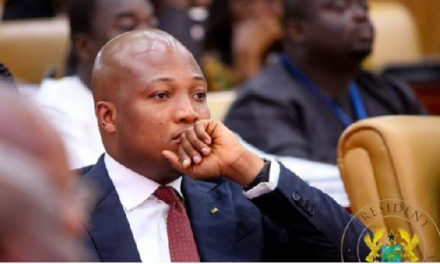 The Member of Parliament for the North Tongu Constituency in the Volta Region, Samuel Okudzeto Ablakwa, is advocating for a policy that will ban government appointees from travelling outside Ghana to seek medical care.

This, he believes, will compel the government to focus more on fixing the challenges in the country’s healthcare system to make it robust.

Narrating the story of a 12-year old boy who passed away in his constituency due to difficulty in transferring him to a tertiary hospital, Mr. Ablakwa complained about the country’s broken health system which he says needs an urgent fix.

“With the continuous no bed syndrome, why are there so many abandoned hospital projects all over the country? And why are others like the UGMC being under-utilized? If that 12-year-old boy was my child or that of Sam George, was that the kind of care he would have been accorded when it was clear he needed to be referred?” he asked during an induction ceremony organized by the Accra Ubuntu Lions Club on Saturday.

“Why can’t we have a health system that works for all regardless of status, size of pocket, who you know or who knows you? This cannot be normal and we cannot accept this. The challenges in our broken healthcare system must not be allowed to fester. Some of the challenges are so basic that we have absolutely no excuse.”

As part of his recommendations to the government in fixing the health system, he asked for a policy that would ban government officials from seeking medical attention in foreign countries.

“There is the need to implement a policy of ‘No medical treatment abroad’ for members of the Executive, Legislature and Judiciary with immediate effect. This appears to me to be the best way to address the numerous challenges in the health sector. This will force us to get things right and do right to avoid the needless death of the 12-year-old boy which continues to traumatize me,” he bemoaned.

The former Deputy Education Minister did not explain further how his proposal ought to be carried out considering that the category of persons he mentioned reserve the right to travel outside for medical care at no cost to the state.

It is the norm in Ghana and most parts of Africa to find politicians including Presidents and other top officials travelling outside their home countries to seek medical care elsewhere, sometimes for basic medical conditions or checkups.

Many believe that these officials do not trust the health systems they’ve built in their countries because of the numerous challenges that exist largely caused by low investment and neglect.

The tragic incident, which happened on Friday, May 14, involved a 12-year-old boy in the North Tongu constituency who could not be saved despite efforts by the MP, Mr. Ablakwa, and the MP for Ningo Prampram, Sam Nartey George.

Yesterday evening around 8pm, I got a call and messages from an Assemblyman in my Constituency whilst I was at church that his 12 year old son had been rushed to the Battor Catholic hospital in the morning. The situation had been deteriorating and a decision was made early afternoon to transfer the child to Accra.

Calls were made to Korle Bu Teaching Hospital but they refused to accept the child that there was no bed. Calls were made to 37 Military Hospital and they agreed to take the child. This was about 3pm. Then the next hurdle began. The National Ambulance Service was called to transport the child. Getting the Service was another issue entirely. After getting the service, they insisted that they cannot move the child until they got their own independent confirmation from 37 Military Hospital. For well over 5 hours, they could not get anyone from 37 to confirm.

It was at this point the Assemblyman in desperation called me. I quickly reached out to my Colleague and Brother Samuel Okudzeto Ablakwa who is the MP for the area to see if he could intervene with the Battor Clinic. He immediately called Dr. Atuguba who is the Head of the facility and put me in touch with him. It became clear quickly that Battor had done all they could and it was in the hands of 37 Military Hospital.

Hon. Ablakwa again called a Constituent of his who is a doctor at 37 to see if he could help us. At this point we had finally gotten an ambulance on standby to convey the child. By the time we got a Doctor at 37 to get involved and give the all clear to the ambulance service, the little boy blacked out and could not be resuscitated. He died at 10:05pm.

Why it would have to take 2 MPs to find a bed for a dying child who needed critical medical care has deprived me of sleep. Why we have ambulances that cannot move because there is no system in place to let them know where to go angers me. Why we have a world class facility like the University of Ghana Medical Centre with so many empty beds rotting away beats my understanding.

Yet another needless death. Should you know a big man somewhere for you to get the basic necessities? This death has really pained me. It has left me bitter at the system. It has left me angry at the #FixYourself folks. How could the Assemblyman or his 12 year old fix this issue?

The Republic is indeed very sick and needs to be fixed. How much longer can we go on like this. May the soul of this little child whose only crime is to be born Ghanaian rest in the bossom of the LORD.

COVID-19: 2nd phase of vaccination begins on May 19 – Akufo-Addo

COVID-19: 2nd phase of vaccination begins on May 19 - Akufo-Addo