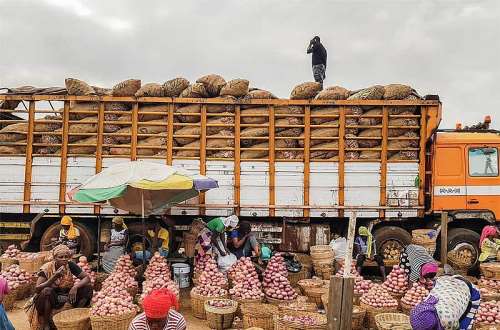 The government has presented an amount of GHS 500,000 to various trader unions at Agbogbloshie in Accra to cart their goods to Adjen Kotoku in the Ga West Municipality.

According to the government, GHS 300,000 will be allocated to the onion sellers, with the remaining amount shared amongst other traders in the business enclave.

The Greater Accra Regional Minister, Henry Quartey, made this known during a grand stakeholders’ durbar at Adjen Kotoku ahead of the relocation of the onion sellers on Thursday, July 1, 2021.

“Government is making available GHS 500,000. I want to reiterate that it is for transportation to Adjen Kotoku. Let me also put on record that from this evening”, the Minister said.

Government-issued a seven-week ultimatum to onion traders in Accra to relocate from Agbogbloshie to Adjen Kotoku.

That market however remains abandoned.

The Regional Minister, Henry Quartey, said his outfit will be compelled to demolish the Agbogbloshie Onion market on July 1, 2021.

As the deadline, July 1, 2021, however, draws closer, the onion traders want more time to adequately prepare for the move.

“It is unfair for the Minister to give us a short notice to relocate. We pleaded with him for more time, but he did not heed to it. Besides, the stalls that have been provided are not good enough for selling onions. We have not said that we’ll not move; we are only begging for more time to put things together,” a trader said.

Another trader said “1st July is a few days away, we won’t be ready by then. We are pleading with the Regional Minister to give us some more time.”

Henry Quartey, recently disclosed that he has uncovered a plot by some onion sellers to have him killed spiritually over plans to relocate the sellers to the abandoned Adjen Kotoku site.

He said nothing will stop him from doing his work as part of the ‘Let’s Make Accra Work’ campaign.