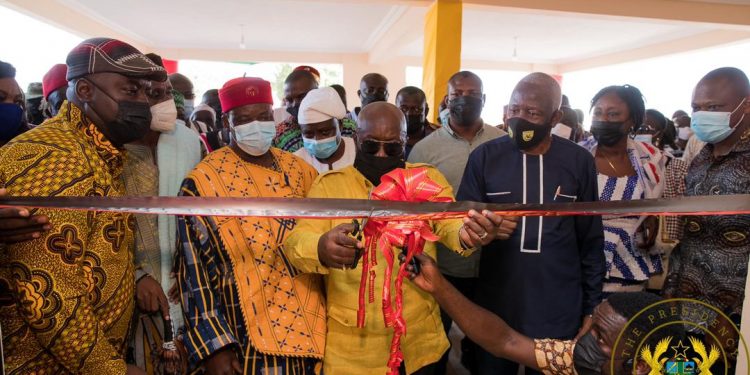 Construction of the new Assembly building commenced in the first term of President Akufo-Addo, with the Upper East Regional Minister, Stephen Yakubu, and other officials of state assisting the President in the commissioning at Zuarungu, the site of the building. 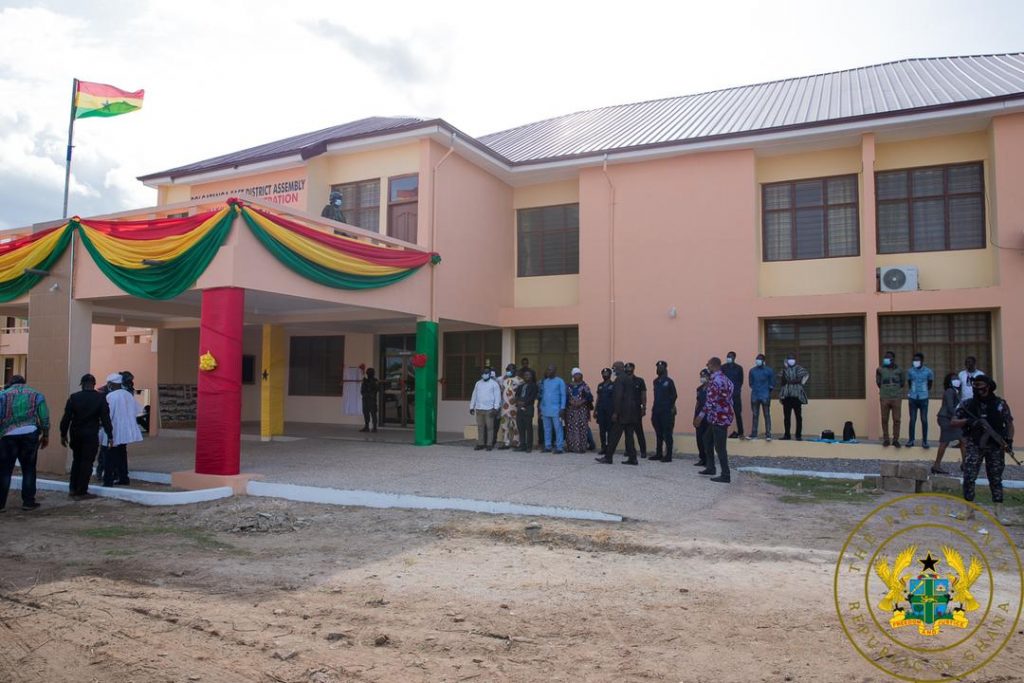 Earlier that day, President Akufo-Addo was at the palace of the Zugraan Bawku Naba, Asigri Abugrago Azoka II, in Bawku, to pay a courtesy call on him as part of his visit to the Region and the chiefs, queen mothers and elders of the Kusuag Traditional Area.

In his address, the President thanked the Bawku Naba for the warm welcome and the strong words of commendation he gave him and members of his government. 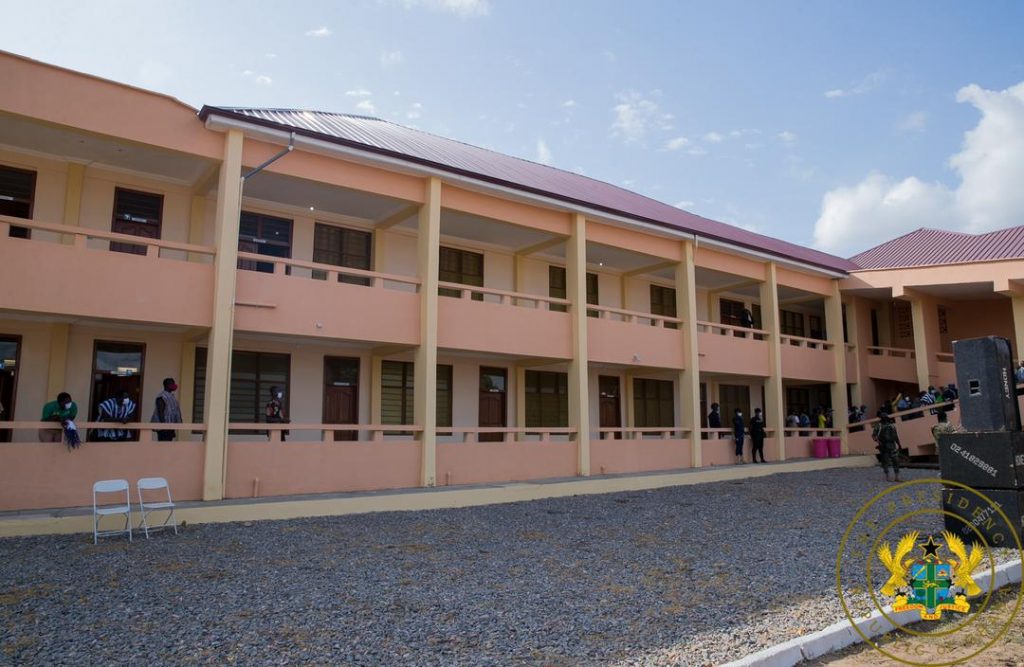 “I came also to thank you and the people of the Upper East for your support of me and my party during the 2020 presidential and parliamentary elections. As you spoke to me frankly, I have to speak to you frankly as well,” he said.

The President continued, “I have to say that I was very disappointed with the results of the election in the Upper East Region, especially when you consider the work that we have done in this Region. Whatever the case, at least we have one seat and that is the MP for Binduri. I have to thank you for that.” 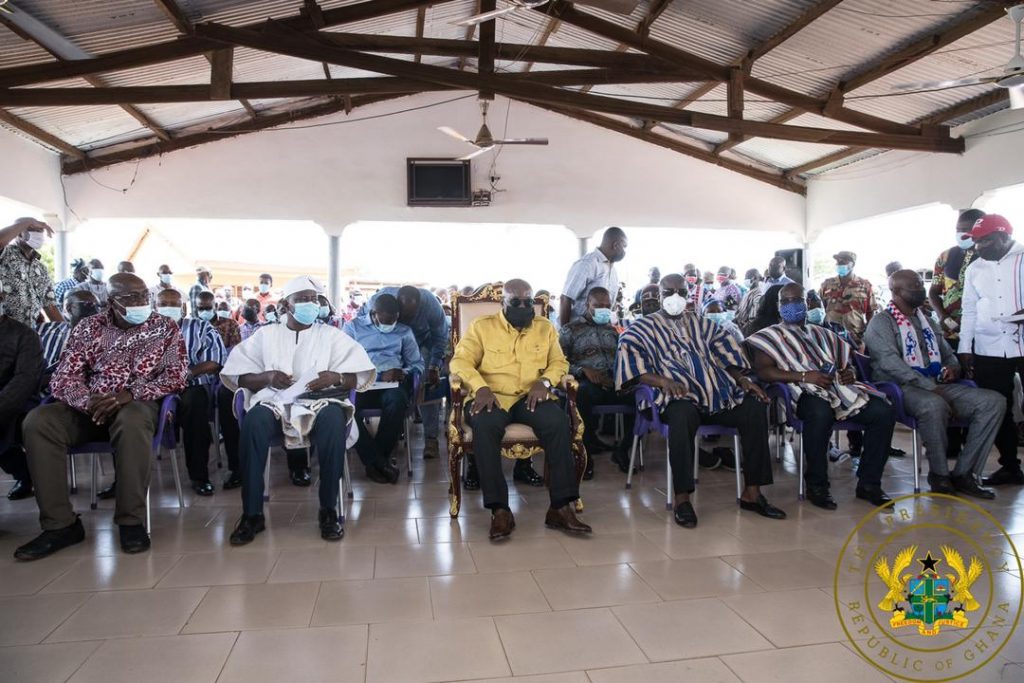 President Akufo-Addo was delighted to note that the various interventions that the government has put in place since 2017 – Free Senior High School, Planting for Food and Jobs, One Village One Dam, One District One Warehouse – are all being well-received in the Upper East region.

“I am also very happy to hear from you about the peace in the area. That is the work of the Bawku Interethnic Peace Committee. The handicap of the committee that you referred to with regard to transport will be solved. Very soon, the car you wanted for the committee will be delivered to you. We have to do everything possible to maintain the peace and security of the area,” he said. 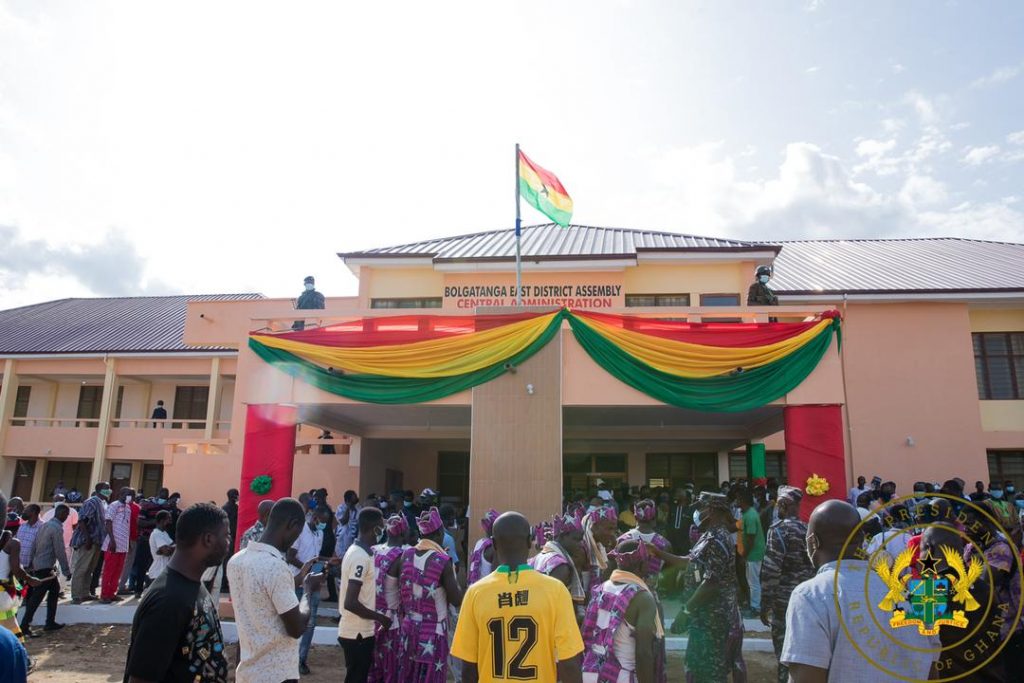 The President added that six (6) warehouses in the Kusaug Traditional Area are being constructed, and are 80% complete.

Additionally, he added that 40 dams have been built in the Kusuag traditional area as part of the One Dam One Village initiative.

“In the same way under the 1-District-1-Factory policy, very soon we are going to establish a guinea fowl processing factory here in Bawku. I am so happy to hear the commitment you have made to stop the smuggling of fertilizer from the area. It is a very important commitment, and I applaud you very much for it,” he added.

On roads, President Akufo-Addo indicated that the road construction situation in the Upper East is improving, and was happy to see that the Bolgatanga-Bawku-Polimakom road is now 80% complete, and will be completed soon. 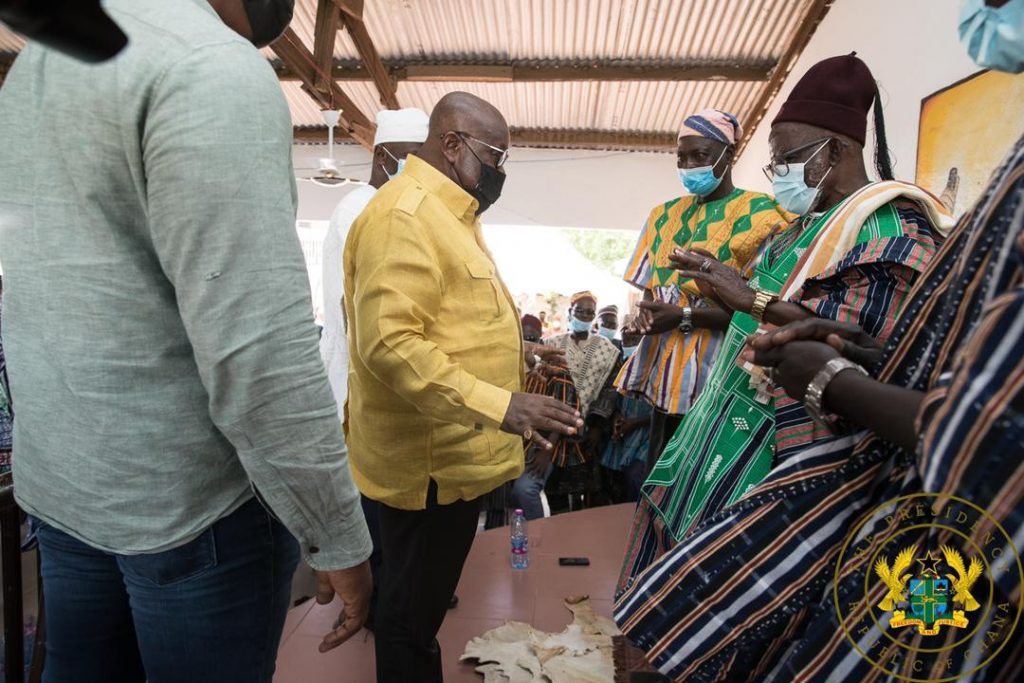 “Bawku Naba, the NDC never did that road. I have come, and I have done the road for you. I know how dear the road is to your heart, and that is why I have said to you that in my time I will complete that road. I am almost there. In the same way, the Bawku principal road, as well as the bypass for the Bawku highway are also going to start very soon because I hear that the consultant has begun the stakeholder engagement which should end very soon. That will pave the way. I want everybody to cooperate with the work that is going to be done to enable these developments to take place,” he said.

President Akufo-Addo assured that, under Agenda 111, districts without hospitals in the Kusaug area will be provided with hospitals, “just as also the extension of electricity is part of the measures that are being unfolded, which you will also be included in”. 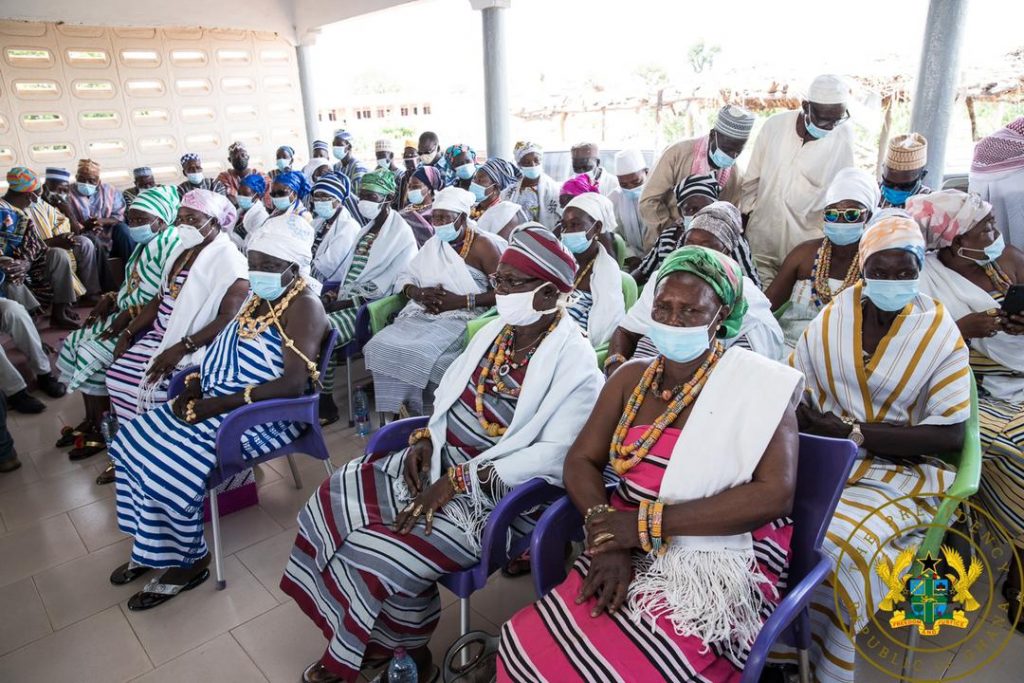 On measures to strengthen the security along the borders of the Upper East Region, the President told the Bawku Naba that a permanent barracks will be established in Bawku to curb the threat of terrorism. 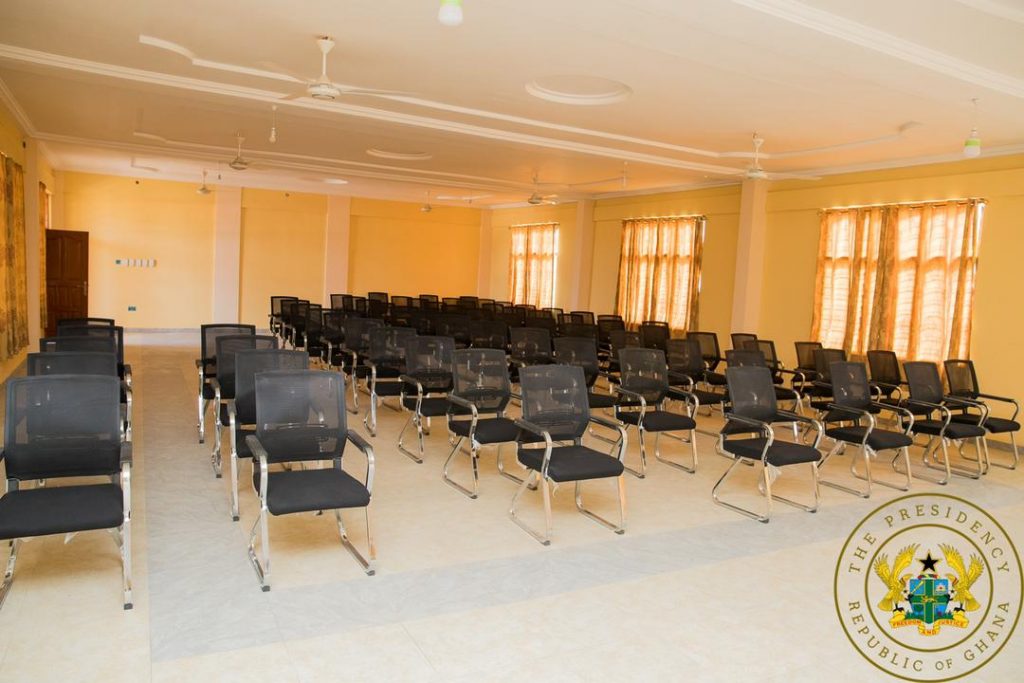 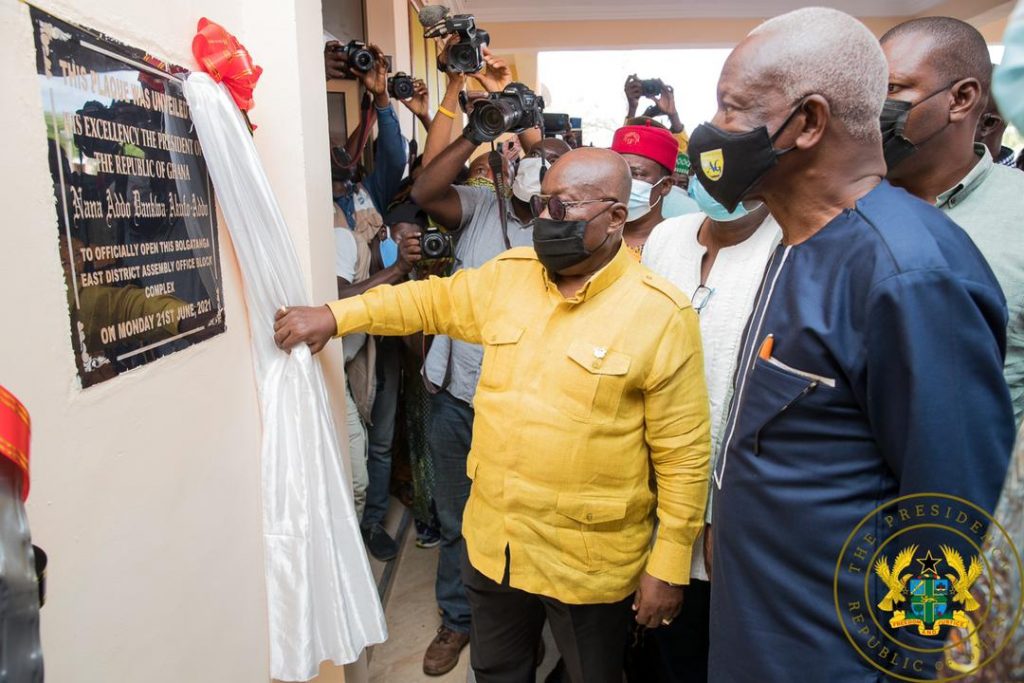 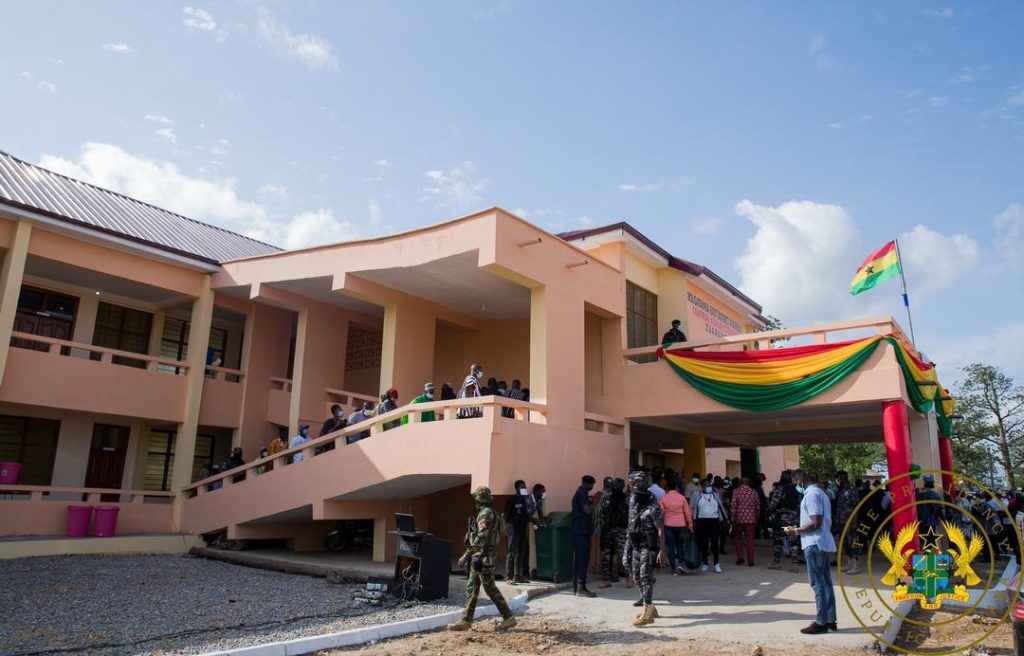